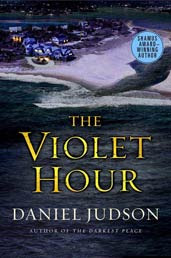 SYNOPSIS: Cal Rakowski is an auto mechanic, and a good one. He's young but he's suffered so much loss in his life that he just lives inside his boss's garage and tries to maintain a routine existence. But now he has a guest hiding out with him, a pregnant friend on the run from her rich, abusive husband. Cal's life suddenly becomes very complicated and non-routine when a beautiful assassin tries to kill Lebell, Cal's friend and co-worker, and Lebell disappears. The assassin and some other very nasty people, including the FBI, start thinking Cal may be able to help find him. With a lot of people looking for Cal, and not to help him, he suddenly has to start learning skills far more different, and deadly, than auto repair.

REVIEW: As thrillers go, I often become annoyed by the old premise of an innocent suddenly thrust into a world of intrigue and violence. That's because the author allows his innocent to make poor decisions that get other characters killed for the sake of moving the plot forward. I'm happy to say that Judson didn't do that to his readers in The Violet Hour.

Cal may be young, but he attacks trouble the way a good mechanic diagnoses engine trouble: He's organized, and he understands cause and effect. He plans accordingly, and adapts with his findings. The character of Cal is the linchpin for this story. Judson draws him as a sympathetic, somewhat repressed young man, and it is only when his friends are faced with danger that we see how much strength and resolve is in Cal. That might not come off as credible except that Judson also has drawn a careful back story for Cal's life, a story of unexpected loss and loneliness.

The pacing of the novel is wonderful, with rapid fire action scenes and moments of poignant characterization. No other character is as fully developed as Cal, but this is his story. The changes he undergoes as the action progresses are more profound and lasting - and maybe even a little scarier - than one usually finds in a thriller.

The weakest aspect to this book lies in the editing. In the early chapters there are some minor annoyances such as the use of "till" rather than "until" or "'til." Saying "upper-scale" rather than "up-scale." And too often using modifiers such as "nothing if not" or "no less than" when a more direct statement would be stronger. Small things like that, but they are frequent in the early going, almost as if there was a lack of confidence in the prose. But that's only in the first couple of chapters - or else I just got so sucked in by the rapidly evolving plot that I didn't notice the problems anymore.

Again, that's just quibbling on my part. The Violet Hour is an absorbing thriller, and it's easy to see why Judson has two Shamus Awards to his credit.