EL GAVILAN is a fascinating thriller about three law enforcement officers who collide over the issues stemming from illegal immigration: Tell Lyon, a former border-patrol officer, whose tragic past follows him from the border to central Ohio, as he takes up the job of police chief in a small town with limited resources; Able Hawk, the title character, is the unorthodox county sheriff Tell must rely on for additional resources; and Walt Pierce, a neighboring-county sheriff with a screw-the-world, by-the-book-and-by-the-balls mentality. The sadistic rape and murder of a young Latina sets these characters, and others, in explosive motion, sliding and caroming off each other as the facts surrounding the murder come to light. Adding to the fireworks are gangbangers and a reporter who at best can be described as weasely and egocentric. If it's true that the main character in a good novel will always be a changed character by the end of the book, then EL GAVILAN is a great novel, because every character in this book is forever changed by the events that unfold.

It's no secret that I'm an unabashed admirer of author Craig McDonald's Hector Lassiter series. What he's done with his first standalone novel is something very different from his Lassiter series. EL GAVILAN is more mainstream contemporary fare than the Lassiter books, but no less intriguing. Where the Lassiter books are full of both overt and sly historical references, and pop-culture head games (ahem), EL GAVILAN requires the reader to fully engage with characters whose diverse opinions on controversial topics such as illegal immigration sometimes contradict their actions, and yet when examined in depth seem not to be contradictory at all, or not entirely. What this book has in common with the Lassiter series, aside from stellar writing and storytelling, is the author's finely drawn separation of what is legal, what is just, and what is right -- those three things are seldom one and the same -- and depicting the differences with all-too human characters, both admirable and despicable, as well as those who occupy the middle ground.

In this standalone, McDonald deftly handles the twin reins of pace and tension, moving the story toward a dynamic confrontation, yet creating circumstances that complicate any possible result of that confrontation. This is must reading for anyone who thinks the topic of illegal immigration begins and ends somewhere other than his own backyard. The author's small town setting is fictional, but there are recognizable places and incidents from my own city. And central Ohio isn't usually the first place people think of when the topic of illegal immigration arises.Without preaching or pandering to the extremists on either side of this divisive issue, McDonald makes the reader intimately aware of the causes and effects, and manages to tell a damn fine story at the same time.

Note: B&N and amazon both list this book with a release date of 12/18, but B&N is shipping already. 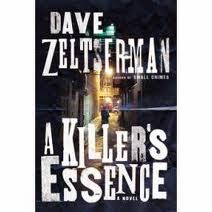 "O wad some Power the giftie gie us
To see oursels as ithers see us!"
It's enough for me that Zeltserman sees his characters as they are, warts and all, for he enables the reader to blush for, cringe from, pity, and ultimately root for Stan Green.
at 11:20 PM 2 comments: