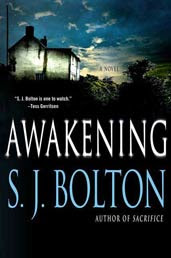 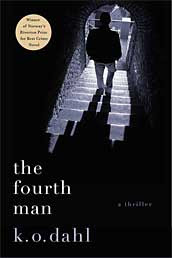 SYNOPSIS: Oslo's Detective Inspector Frank Frølich saves the lovely Elisabeth from getting caught in the crossfire during a police raid. A few weeks later he encounters her again and they begin a strange affair: secretive on her part, obsessive on his. One of Elisabeth's secrets is that she has a brother who is part of a known gang of robbers. When she provides an alibi for her brother and his gang on the night a young security guard was brutally murdered, even though she was in Frank's bed that night, Frank finds himself off the job and under suspicion. And still very much obsessed by Elisabeth. When she disappears after providing the alibi, Frank searches for her against all orders to stay away from the case. He's sure he's being used; his professional life is coming apart at the seams, but his obsession with this manipulative woman overrides his good sense. And his determination to get at the truth sets in motion a series of arsons, murders, and betrayals.

REVIEW: Author K.O. Dahl gets a lot of buzz about being Norway's answer to Henning Mankell. Truth is, Dahl doesn't need the comparison to another Scandinavian writer, however good, to be worthy of attention. Dahl has won Norway's Riverton Prize for Best Crime Novel, and it's easy to see why. The Fourth Man is a wonderfully intriguing psychological mystery, with plenty of complex twists and cryptic turns, overlaid with the fine sheen of noir.

The first few chapters, in which the affair between Frank and Elisabeth develops, are emotionally claustrophobic in the way Frank's deep sexual obsession rapidly overwhelms him and subjugates him to the point that he drops everything whenever Elisabeth sends him a one-word text message: 'Come!'

From the point of her disappearance though, the book becomes more of a police procedural. The relationship between Frank and his boss, Inspector Gunnarstranda, is developed through their dialogue, and it isn't the stereotypical love/hate relationship of so many cop/cop's boss characterizations. Frank and Gunnarstranda have a more nuanced, more balanced relationship. That may be because although this is Dahl's first book published in the USA, this book is farther along (fourth or fifth perhaps, I couldn't pinpoint it) in the Gunnarstranda/Frølich series, and the first in which Frank is the focal character.

What is interesting about Frank is that although at times his obsession appears to make him a weak man, it is also indicative of his willingness to exceed boundaries. At one point an embarrassed Frank goes to a strip bar for the first time in his life, showing the reader that he has restricted himself to living within certain social boundaries. But for Elisabeth's effect on him, Frank may never have known how willing he really is to not just think, but jump outside the box. On the occasions that Frank breaks the rules, he does so with breathtaking force and menace. Being rich and powerful is no protection from Frank. While he's no Dirty Harry (Frank doesn't even carry a gun), he certainly understands where Harry is coming from.

At one point Gunnarstranda pigeon-holes Frank's search for Elisabeth by using the old 'cherchez la femme' phrase. 'Cherchez la femme fatale' would have been more apt. Elisabeth has so many secrets from so many people that watching Frank begin to parse them is like watching him play with an unusual set of matryoshka dolls. The question is, will the last doll reveal the real Elisabeth? And will Frank ever find her, or is she lost to him forever?

Dahl has a deft touch with his prose, he's never offensively graphic with the violence or the sex. His descriptions don't get in the way of the action, but at the same time the writing is evocative and puts the reader on the scene. Here's a brief passage from Frank's first visit to a strip bar, where he's trying to find a woman who knows Elisabeth:


He scanned the audience. Stag party or not, these men were serious. Welcome to men's country, he thought, and looked up at the ceiling where he discovered a flashing disco ball the like of which he had not seen outside seventies John Travolta films. He looked at the faces in the room. Yes, he was in the arena of shadows, the hour of the rats, the wedding procession of the cockroaches: in this light all the faces were lent the same blue and yellow hue. This was a place where it didn't matter whether you were sick, healthy, Aryan, Indian, Chinese or just uncomfortable. This was the place where there was no room for reflection or appraisal, where lonely souls would reap pangs of guilt, bitterness, or self-contempt the following day - or another time, later anyway - for everyone here can deceive themselves for a few seconds that welfare is a fruit that grows out of your own wallet. The password of the void here was: 'Another drink, please.'