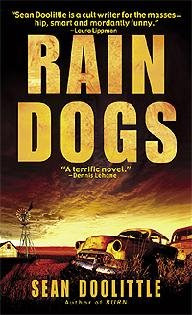 Synopsis: Investigative journalist Tom Coleman is running from the death of his young daughter and the ruin of his marriage. He is running to the bottle. Leaving behind his job in Chicago for his grandfather's legacy in the Sandhills region of Nebraska, Tom encounters a destroyed meth lab, drug runners, police brutality, and faces his own weakness. He also renews his acquaintance with his first love, Abby, now a widow and with a stepson who is right up to his teen angst in all the trouble.

On the whole I enjoyed this book and I think author Sean Doolittle has tremendous potential. My expectations may have been a little high because the recommendation to read Doolittle's work came from one of my favorite authors, Michael Koryta, who said that Doolittle was writing the best crime fiction in America right now. High praise indeed, and possibly true of Doolittle's more recent work which I do intend to read. This book, however, is good but not good enough to qualify it as the best crime fiction in America. And after reading Laura Lippman's blurb on the jacket: "Sean Doolittle is a cult writer for the masses -- hip, smart and mordantly funny," I think she must have been referring to a different book as well. Rain Dogs is very much a mainstream work of crime fiction. In other words, if this book is 'cult' crime fiction then so is Laura Lippman's.

Characterization: The characters are solidly drawn but rarely went deep enough to resonate with me, in spite of the great torment that provides the protagonist his excuse to drink. Compare the descriptions of Tom Coleman's binges to one of the Dave Robicheaux character's (from author James Lee Burke) lapses. There is a relentless and awesomely ugly honesty in the Robicheaux portrait. Coleman's episodes are more simplistic. He drinks and then he awakens. The nastiness in-between somehow seems not only not to be part of the Coleman character, it almost seems never to happen. Except for one truly well-written, out-of-the-body depiction of a drunk Coleman holding a gun to his head and contemplating suicide it's hard to believe the guy is really as pathetic as such a man would be in reality. It's like a cheat, that the author gives you this terribly flawed character but then disguises the results of the flaw so well that you are hardly ever out of sympathy with him. If Coleman had no worse habit than biting his fingernails I would have had the same reaction to him. The finest bit of characterization is that of the county sheriff, Roy Hilliard. Hilliard walks and talks like he could be a stereotypical small-town crooked sheriff but the man goes deeper than that, often leaving the reader wondering about his motives. He's a political creature as well as a community leader; a man of realism but not so pragmatic that he lacks fire in the belly. For me, he was the most interesting character in the story. Best part of all the characterization was the dialogue. Doolittle can definitely write dialogue, from strait-laced Federal agents to laid-back stoners.

Pacing: Slow to build, but not too slow, the tension does wind tighter and tighter. From the beginning, small bits of information are dropped, keeping the reader's interest honed right through the climactic confrontation. I thought the pacing was perfection.

Setting / Ambiance: Maybe I didn't feel like I was about to go canoeing on the river with these folks, but I still got a good feeling about the distances between everything, including people, and I was surprised by how the landscape felt more welcoming and much more variable than I anticipated when I first realized the setting was western Nebraska. I was totally intrigued by the aquifer and I'll be reading up on that, you better believe.

Plot: Maybe not the most original I've read, but given there were some holes in the story and a certain lack of resolution, it's probably best that the story was more mainstream than cult, Laura Lippman notwithstanding. The story in fact, is rather basic, and if there is a single theme that unites the book and lifts it above merely being an enjoyable read, well, I missed it. So sue me.

Overall satisfaction: Maybe it doesn't seem like it, but I really did enjoy Rain Dogs. It held my interest and moved along nicely without rushing me or leaving me in the dust. I feel certain that author Sean Doolittle can do better (probably even already has), and I love to read along as a new author begins to stretch and find for him/herself what works and what does not, and just what his own writing voice is. If I were recommending this book, it would be to people who are fans of Michael Koryta, Robert Crais, Sean Chercover and Giles Blunt perhaps, with the advisory that this particular book was written by an author who has the potential to be as good as they are. Doolittle's particular gift lies in the easy flow of his prose, the dialogue and exposition never step on each other and neither gets short shrift. And one of the best things about Doolittle's prose is the lack of affectation and pretention, something all too prevalent among certain new writers who think they are the next coming of Ken Bruen.

In summary, I'd say that Rain Dogs, regardless of its shortcomings, is one of the best books I've read this month, and that puts it squarely in the company of books by Koryta, Winslow, and Westlake. Not quite to their level of craftsmanship perhaps but it sure enough makes Doolittle a writer that I'll keep tabs on.
at 4:55 PM No comments: