KATJA FROM THE PUNK BAND by Simon Logan

Katja wants to get off the island much more than she wants the vial of chemical. So much so that she shot her boyfriend, Januscz, when she found out he was planning to take the vial and leave her on the island. But Katja must have that vial to even stand a chance of getting off the island, and she recruits a useless junkie named Nicolai to help her. Katja also needs to avoid her parole officer, Anatoli. Nicolai needs to avoid a thug named Kohl, to whom he owes money. Kohl's boss, Szerynski, has designated Kohl to get that vial. Kohl designates Nicolai. Anatoli needs to sell the vial for the money that will allow him and his lover to flee the island. Anatoli's lover is the wife of one of a drug lord named Dracyev. Dracyev is Szerynski's competitor. The precious vial belongs to Dracyev.

Are we all clear on that? Don't worry, author Simon Logan has constructed his novel so that you'll never be confused about who's doing what and why. And yet the infrastructure of this novel is anything but simple. Sliding time-shifts, back and forward; alternating points of view; and an alt-world brushed in the broadest of strokes. The alt-world could be now, could have been the 80s, could be in the future, could be on another planet. Doesn't matter when or where, only the moment matters in this book. Logan makes it all work.

Stylistically, the book evokes early William Gibson, but instead of Gibson's Sprawl of neon and chrome, Logan provides a rusting industrial set-piece: dark, dirty, and restrictive. Those who prefer character-driven pieces, as opposed to atmospheric tales of action (imagine if Gibson and Swierczynski co-authored a book) might not take to Katja and her foes; but even those readers will want to know, at book's end, what happens next for Katja. Fortunately for Katja's fans, and I include myself in their number, the author will soon bring a sequel.

KATJA FROM THE PUNK BAND is a welcome break from the usual round of serial killers and angst-ridden, alcoholic-loner protagonists. And you won't believe what all she can do with a guitar.

Order from ChiZine Publications for 30% off the cover price. Also Available in eBook From:

Or in Trade Paperback From: 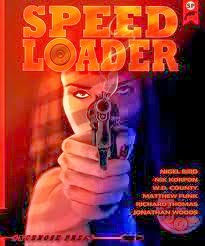 It's no secret that Spinetingler has joined the e-publishing world under the Snubnose Press moniker and with an aggressive publishing schedule of a book a month. Their first offering: Speedloader, six stories of murder and mayhem that also are of the usual high caliber (see what I did there?) presented by the good folks at Spinetingler.

These stories are well worth the time and money, but I don't really need to say that. The Spinetingler affiliation speaks to the quality without any added endorsement. And some of these writers will be familiar to many readers of online crime fic already.  But I do want to take the time to highlight one of these stories by a writer whose output has not been so prolific that he's become a familiar name -- yet.

I first noticed W.D. County's name when I read a story of his at Spinetingler called My Name Is Priscilla. The quality and originality of that story, with its special brand of heartbreak, made me keep County's name in mind but I just wasn't finding his (I know the correct personal pronoun now) work anywhere. And then here comes the debut publication called Speedloader. And right there on the cover, under the names of Nigel Bird and Nik Korpon (who also turned in fine stories) and above Matthew Funk's name (ditto on the fineness), is the name of W.D. County.

County's story, Plastic Soldiers, is a tale of stark courage about a boy who receives inspiration and guidance from the toy soldiers in his pocket, even under the most horrific circumstances. County's middle initial should be H, for Heartbreak, instead of D. It's a brilliant story.

And at only 99 cents, from Smashwords and amazon, this is the most affordable Speedloader on the market.
at 9:39 AM 1 comment: