THE LOCK ARTIST (Steve Hamilton) was in my TBR stack prior to publication. With all the hoopla and awards, one would think I would have read it sooner. Just as well I didn't, as the story didn't capture me as thoroughly as it did the Edgar Award committee. The story revolves around a mute teen boy, Michael, with a skill for lock-picking and safe-cracking. The prose pretty much lies flat except in one or two places, and though much is made about the circumstances that rendered our hero mute, those circumstances had little to do with the plot. The passages that detail lock-picking and safe-cracking are certainly interesting, but the teen love story dropped the suspension on my disbelief.

THE DEVOTION OF SUSPECT X (Keigo Higashino) was a much more interesting book, though again the prose sometimes felt off-key or a-kilter. I don't like to automatically blame the translator though; it could be the author's doing. Nevertheless the story is a wonderful cat-and-mouse tale of psychology as well as being a story of unrequited love. When Yasuko and her daughter inadvertently kill Yasuko's abusive ex-husband, a neighbor, Ishigami, weaves a complex web of protection around her. Ishigami is a math genius who proves to have a talent for real-life applications. But his foe turns out not to be the detective investigating the case, but an old college friend and physicist, another very bright thinker. Though there is a plot twist at the end that crushed the beauty of the tale rather than enhancing it, it's wonderful to watch two labyrinthine minds contest Yasuko's fate.

A KILLING WINTER (Wayne Arthurson) is the follow-up to the author's 2011 debut, FALL FROM GRACE. Newspaper reporter Leo DesRoches is exploring the world of Edmonton's homeless when one of his contacts, a Native street kid, goes missing. The search for the boy takes Leo into the violent world of Native street gangs, all the while Leo must deal with his own gambling addiction. The author has eliminated the expository passages that revealed his journalism background in the previous book, but the overall story arc staggers, though does not collapse, in the final third of the book. The ending is saved by a surprising scene as Leo's past sins appear to be catching up with him. It's a manipulative device, some might say, to get readers like me to buy the next book, but I would do that anyway. I like the character of Leo, I want to know his fate. And it's clear that the author has worked to improve his skills from book to book.

AS THE CROW FLIES is the latest novel in Craig Johnson's Walt Longmire series. As with all of the books in this series, what's not to like? Walt and his friend, Henry Standing Bear, witness a woman's fall from a cliff. Or was it a fall? The book is filled with well-defined, complex characters and Johnson's trademark Western humor. If you're unfamiliar with Johnson's novels, you don't have to start at the beginning (THE COLD DISH) but the truth is, you'll be cheating yourself if you don't.

Darrell James makes his debut as a novelist with NAZARETH CHILD. And a terrific opener it is, too. James has created a smart, modern heroine in Del Shannon, a Tucson field operative with a reputation for being able to find anyone, anywhere. The only person Del has never been able to locate, or even learn her name, is her mother. Until one day the FBI comes calling, and Del learns she has inherited a house right in the middle of Nazareth Child, Kentucky, a town run by a religious zealot named Silas Rule. Silas has more on his mind than saving souls though, and the FBI wants Del to find out what. I see the term "best-seller" all over James's future.

I could, maybe even should write an entire blog post about William Goldman's first novel, THE TEMPLE OF GOLD. First published in 1957, the book is a fitting start for the man who would later write MARATHON MAN, MAGIC, THE PRINCESS BRIDE, and the screenplay for BUTCH CASSIDY AND THE SUNDANCE KID. Technically this book is a re-read for me, but I first read it around 1968 and I remembered little about it save the names of the main characters and that I liked it. And after reading it I now know why I was never enamored of CATCHER IN THE RYE. Holden Caulfield was never as funny, as interesting, or as male as Raymond Euripides Trevitt. Ray's coming of age story takes a bit longer than many such, as Goldman skillfully guides Ray through the teen years, the Army, and married life. 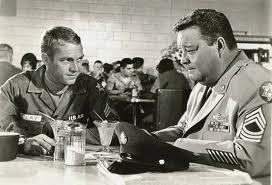 This must be the month that I re-discover Goldman's work. I was hoping to re-read his SOLDIER IN THE RAIN when TCM aired the film version this past week. A Steve McQueen film I had never seen, and based on a Goldman novel I enjoyed (although the screenplay was co-written by Blake Edwards and Maurice Richlin)? Oh, yeah. I'm there, I'm right there. And what a satisfying film it is, too. McQueen's none-too-bright Eustis Clay's friendship with Gleason's beautifully underplayed and erudite Maxwell Slaughter works a treat. Gleason was never better. ("Let me tell you something, my friend: being a fat narcissist isn't easy.") I'll be watching it again soon.

And of course I wouldn't dream of skipping the latest episode in John Sandford's Lucas Davenport series, STOLEN PREY. No one can accuse the author of shortchanging the reader on pace, tension, action and body count. This time around Lucas is after money launderers, hackers, thieves, and a trio of hit men for a Mexican cartel. It's a tough job for Lucas and his pals but a fine old time for the reader.
at 8:42 PM 2 comments: