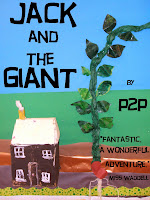 JACK AND THE GIANT is published by Sea Minor (the brains behind which is the inimitable Nigel Bird) and is available in digital format only, for the equivalent of only five beans:  $0.99 USD at: Smashwords and amazon.
at 7:09 PM 5 comments:

When I purchased DISCOUNT NOIR, which is available only as an ebook, it was as much with the idea of supporting the many writers whose stories I've enjoyed for free on the web as it was with the idea that I would also enjoy more of their work. I didn't envision that I would feel compelled to write a full review of this anthology, and for that I most humbly apologize to all of those who contributed to and edited the work. I, of all people, should know better than to underestimate the talent pool out there.

The project that eventually became this anthology began by Patricia Abbott issuing a flash-fiction challenge in 2009, "Megamart: I Love You." Writers were asked to contribute a story of about 800 words, set or partially set, in a mass-merchandise store. On November 30, 2009, some 30 stories were simultaneously published on various blogs. The anthology includes those stories and a few more.

I rarely read an anthology in its entirety, nor in the order the stories are printed. I like to seek out favorite authors first, then intriguing titles. But I began at the beginning with DISCOUNT NOIR and found myself loathe to skip around. Why? Because by the sixth or seventh story I found myself impressed by the range of emotion, and by the originality displayed in these very short works. Laughter, tears, fear, paranoia, and rage permeate these stories of love, murder, revenge, hardboiled, noir, mafia, zombies, homelessness, child endangerment. and more. One story would leave me chuckling and the next would wring my heart. So I read every story -- 42, in case you're wondering -- and in order. With so many stories, inevitably there are a couple of non-starters. But the vast majority are entertaining and highly original.

The authors themselves represent a mix of traditionally published and not; those who mostly write in the short form versus those better known for their novels. Easily recognized names include Ed Gorman, Bill Crider, James Reasoner, Dave Zeltserman, Sophie Littlefield, Chris Grabenstein, Toni McGee Causey, Anne Frasier, and others. Names well known to those of us who haunt the crime fiction webzines include Keith Rawson, Albert Tucher, Patricia Abbott, Steve Weddle, Sandra Seamans, Kyle Minor, Kieran Shea, Chad Eagleton, Eric Beetner, and many, many more. And yes, there were some names that were new to me although they may have been published online or traditionally for all I know: Fleur Bradley and John Weagly among others.

My favorite stories alone in this anthology would constitute excellent value for the money ($4.50), so for those of you who are still looking for fine, fun reading to download to that new ereader you got for Christmas, be sure to check out DISCOUNT NOIR. Here are some of my favorite stories:


ACCEPTANCE by Cormac Brown: The story of a small-businessman and grandfather who goes toe-to-toe with the massive retailer -- and wins.

THIRTY-ONE HUNDRED by Loren Eaton: Romance and zombies at the Megamart.

HOUSE NAMES by James Reasoner: Beware of authors rearranging the book displays at the Megamart.

MONDAYS AND THURSDAYS by Donna Moore: Planning the perfect murder entails some carefully-planned shoplifting at the Megamart.

CRACK HOUSE by Anne Frasier: A secret room in the Megamart provides shelter for a homeless woman.

HAVE YOU SEEN ME? by J.T. Ellison: A desperate mother with a dying daughter recognizes a face from a milk carton.

And my very favorite: DISCOUNT PRIMROSE by Todd Mason, an outstanding story of a future in which there is no need to ever leave the Megamart store.