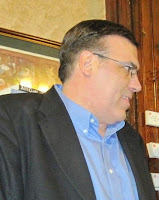 It was standing-room only last night at Foul Play Mystery Books for native son Craig McDonald. Okay, so maybe that's a bit misleading as the store's square footage doesn't exactly rival that of a chain store. But it's a rarity nonetheless to have the little store quite so crowded for any author. And it was the first time in my memory that the store ran out of copies of an author's newest book, in this case PRINT THE LEGEND, before demand was satisfied. May all his future book signings be plagued with such good fortune.

A huge thanks to Craig, whose busy workday would leave most of us staggering under the pressure, for making time not only to appear and sign, but to truly give of himself during his talk. I know that I was not the only one delighted and intrigued by the bizarre bits of history Craig wove throughout his presentation.. A good blend of humor, history, mystery, and crime -- just like his books. When an author can make his audience feel like they've been clued in to government secrets, behind-the-scenes details surrounding Hemingway's death, and the bizarre events involving a nationally prominent family -- hell, yes, we were lining up for the Kool-Aid.

Book buyers also came away with a special prize from Craig: a chapbook containing Colt, a short story that details how Hector Lassiter came by the 1873 Colt Peacemaker that is his truest companion throughout his life. Don't think for a moment that this is just some fluff story to make the book buyer feel like he got a bargain. This story is a matched bookend to The Last Interview, the first published story to feature the Lassiter character. And of course, he wouldn't be The McDonald if he didn't use the story to blend fact with fiction, and fiction with fiction, and generally mess with your head just a little into the bargain.

Adding to the special nature of the event, it was a pleasure to meet Pete Guzzo, a fan of Corey's blogging for some while. I know Corey has friends, but who knew he has fans? Thanks for making yourself known, Pete.

And thanks to everyone else present, particularly the gracious author, who all tolerated my fangirl behavior and helped me with all the books I needed signed. (No, Jen, I wasn't quite as bad as that guy in Dayton but it was a near run thing, if I may quote the Duke of Wellington.)

In case you missed last night's event, Craig is also scheduled to appear:


These books by Craig McDonald are available at a fine indie store near you or online by clicking the links: 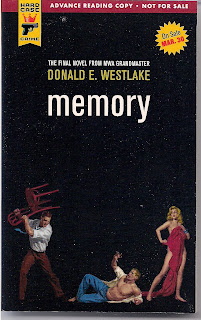