REVIEW: THE END OF EVERYTHING by Megan Abbott 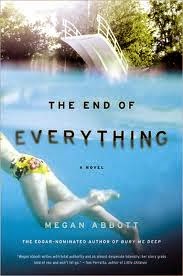 Thirteen-year-olds Lizzie and Evie are neighbors and best friends in the 1980s. They look like sisters, they dress alike, but they are closer than that superficiality implies. They share everything: hopes, dreams, emotions, as well as clothing, books, toys. They do everything together, from school to sports to vacations. Only one day after school, Evie disappears. Convinced that her heart would tell her if Evie were dead, Lizzie starts to live in the lap of Evie's family, begins exploring the yards and houses of her neighbors, looking for clues to Evie's whereabouts, why she left, and who she might have gone with. Lizzie is convinced that if she can bring Evie home, everything will be just as it had been.

Megan Abbott's THE END OF EVERYTHING is bound to draw comparisons with Alice Sebold's LOVELY BONES, but the basic premise of these stories -- the disappearance of a young girl -- is the only thing that ties them together. Rather than relying on narration from a dead-and-gone-to-heaven victim, Abbott's Lizzie narrates a tale of wonderment, joy, dread, and dark revelations, sometimes all within the same paragraph. Young Lizzie is perspicacious and naive at once, as only girls-on-the-verge-of-becoming-women can be. Wisely innocent.

Lizzie is a magnificent narrator, wanting to be the center of attention and wanting not to be, deriving clues and evidence surrounding Evie's disappearance as much or more from how she reads a glance and interprets a sentences, as she does from facts and logic. Lizzie is imbued with a voice that mimics the child-adult so very accurately that one is left wondering how did so much about those emotions, that youthful worldview , that sexual innocence dawning on yearning, how is it that it was all forgotten? And how is it that Megan Abbott remembers it all with such perfect clarity?

The characters of Evie's family, her parents and magically beautiful sister, Dusty, are all explored by Lizzie in the manner of an Impressionist painter: from a distance they make a pretty, well-defined picture; close-up, as Lizzie longs to be to them, they seem all blurred edges and colors without definition.

The author has penned a delicious psychological thriller that never gets it wrong by going for the cheap thrill or easy answer. The reader may feel bruised but never slapped, and Lizzie is always there to offer solace to the reader as well as to Evie's family. Evie's disappearance and the events surrounding it all work to lay bare the relationships and conflicts not just within Evie's family but within Lizzie herself. As much as Lizzie is able to read emotion and motive in others, she is almost blind to what drives her from her own family's side to spend evenings with Evie's anguished father, beautiful sister, and nearly invisible mother. The one thing Lizzie is certain of is that when Evie vanished, it was indeed the end of everything -- if 'everything' is Lizzie's innocence.

The author does a stellar job of foreshadowing without being obvious, of misdirecting without misleading, of instilling dread without removing hope, and revealing without judging. Readers of Abbott's more traditional novels of noir should find this newest work fascinating, as her considerable talents tackle more mainstream subject matter here without sacrificing one jot of the style and insight that has garnered her previous books so much praise. THE END OF EVERYTHING is a haunting and moving story about losing and finding and losing again those intangibles, those nearly inexpressible things we most treasure.


The first three chapters of THE END OF EVERYTHING are available for reading at Facebook, and I recommend you go read them right now. Following is just a brief excerpt from chapter two, for those too lazy to click a mouse button:

The next day, Evie and I are standing in front of the school, tapping our sticks against each other in time. The dream from last night is hovering in my head, and I think I might tell Evie about it, but I keep stopping myself. No one ever really wants to hear your dreams.

Anyway, we are having a day of no talking, just being, walking together, tapping our new hockey sticks and yanking our sweaty shirts from our chests.

Still, I can't keep my eyes off the violet stain flaring over Evie's temple. It looks like it could move without you, get up and go. It's like a purple butterfly, I tell her, flitting from her face.

She puts her fingers on it and I can almost feel it pulsing on my own face, a gentle throb.

"What did your dad say?" I ask, and I imagine Mr. Verver's wrinkled brow, like when I slipped on their stairs, running way too fast in my stocking feet, skidding down three steps, and making brush burns all up my calves.

"He bought me a raw steak at Ketchums to put on it," she says. "Mom said it cost more than their anniversary dinner."

It sounds like Mrs. Verver, who says everything with a yawn.

"All night," Evie says, a grin creeping, "he kept calling me Rocky."

We both roll our eyes, but we love it. When the boys tease, you don't want it to be you, but with Mr. Verver, his teases are like warm hands lifting you.

Evie thrusts her hockey stick out in front of her like Zorro. "Dusty said I looked more like a battered wife on a TV show," she says.

Then she tells me how, after dinner, her dad took her for pecan pie at Reynold's, the good kind, gritty-sweet on your teeth. The waitresses felt sorry for her and gave her an extra scoop of ice cream.

I think of sitting with Mr. Verver, gooey pie plates between us, and how the waitresses probably always give him extra scoops. Waitresses were always doing that with Mr. Verver, just like the mothers who buzzed around him at the PTA meetings, filling his plate with sugared cookies and inviting him to their book clubs.

I wish Evie would have invited me to Reynold's. Like other times, with Mr. Verver dabbing Cool Whip on my nose.

Out of the blue, my ankles feel itchy and I wish I could take off my gym socks.

I look down the street, which has that four thirty hush. The summer heat seems early, hovering above the asphalt.

"Where's your mom taking you?" Evie asks, watching a car flutter upward at the speed bump in front of the school.

"The mall," I say. "Are you going to wear your sister's old dress?" I remember the lavender Laura Ashley with the gored skirt that Dusty wore to her own middle school graduation. All those ringlets dangling down her back and her face bright with achievement—it wasn't something you forgot.

A maroon car shimmers out of nowhere and glides past us quickly.

"I don't know," Evie says, kicking her shoe toe into the pavement.

Squinting, she looks down the street. "I think I see her."

We both watch as my mom's tan Tempo floats before us on the horizon.

"That's okay," she says, twirling her hockey stick over her shoulder. I hear the stutter in my mom's car as she pulls up.

The moment stretches out, I'm not sure why.

Evie is looking past my mother's car, down the street.

"What—" I start, but then we both watch as the same maroon car drifts past us again soundlessly. Something in my head flickers, but I can't place it.

I turn back around and there's that Evie face, cool and orderly, the line for a mouth and her smooth, artless expression, like a soft sheet pulled fast, hiding every corner.

I twirl my stick around and clatter it against hers.

"Call me," I say, turning toward the idling car. My mother is looking at us from behind big sunglasses, smiling absently.

I open the door and lean in. "Mom, can Evie come with us?"

But when I turn around, Evie's gone, slipped behind the tall hedgerow, behind the stone columns of the old school.

This face, my face, gone forever.

South African journalist Robert Dell, his wife and two children are all headed off on a holiday, when a black pickup truck runs them off the road. Dell's family is killed and he is framed for their murders.

If that sounds anything like a typical thriller, please, just hold the phone a sec. Because you haven't read anything like this book. No, you haven't. No, it's not like that book or that one or any of the thrillers you'll recall right offhand, and that's because Roger Smith isn't just any writer. In the span of just three books, his prose has gone from spare and evocative to darkly lyrical. His characterizations are masterful, his POV treatment is impeccable. And thematically, where once he was just pretty damned good, he now soars.

DUST DEVILS is a brilliant work, revolving around five major characters: Dell, a pacifist wrought by his grief and also by his sense of justice in a world that has none, into waging personal war on the men who killed his family; Inja, a corrupt, murderous cop and Zulu chief, a man dying of AIDS and looking to superstition instead of science for help, he will kill anyone who gets between him and his 16-year-old bride-to-be, Sunday, because he believes that sex with her will cure him. Sunday wants only not to have to marry Inja. She, as much as anyone, knows him for the cold killer he is. And then there is Disaster Zondi, an ex-cop as a result of having principals in a time and place where those things have no cash value. The author spins these characters and more through a space-time continuum where personal interactions go repeatedly nuclear. Oops, I said five characters, didn't I? South Africa is the fifth one. The varying cultures, the extremes of power and wealth matched again helplessness and poverty, places where AIDS harvests one out of three people thanks to neglect, superstition, and ignorance. Where news events don't begin to tell the depth of the stories.

Along the way, the reader gets a mini-education in the behind-the-scenes politics of South Africa as that country moved from apartheid to... whatever one calls it today, because freedom hardly seems the right word. Unless one is remembering the old song lyric from Me and Bobby McGee: "Freedom's just another word for nothin' left to lose."

Thematically, where other authors would simply push the characters examining their past sins toward a search for redemption or atonement, Smith takes his characters beyond and into a stark cultural landscape where the wages of sin don't include the possibility of redemption, and where careful preservation of innocence is futile because innocence was long ago the first victim of sin. Harshly violent, the book is a broken window onto the cultural indifference to massive suffering, but more pointedly -- and poignantly -- Smith highlights the effect of the neglect by those powerful enough to relieve such suffering, who make such suffering more intense and widespread through corruption and indifference. The story's end is a sorrowful angel, breathtakingly cinematic on one level, and on another so personal that the reader's heart bleeds. A brilliant work.