REVIEW: THE BRIDGE OF SIGHS by Olen Steinhauer 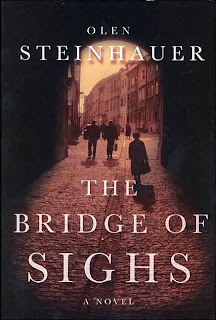 SYNOPSIS: 1948, in an unidentified Eastern bloc nation, rookie homicide cop Emil Brod is given the overwhelming task of investigating the murder of a famous patriotic-songwriter with the expectation that he will fail. Brod, only 22, is hardly brilliant but he is dogged, and as he begins to unravel the twin threads of murder and blackmail, the case takes him into the halls of the rich and powerful and untouchable.

REVIEW: All of that pretty much sounds like your standard crime novel, doesn't it? Fortunately, Steinhauer can do magic tricks that revive the tired and time-worn cliches of crime fiction. I don't know if the author would consider this a compliment but the atmosphere of this story: the universal lack of trust, the depictions of broken people who survived the Nazi inferno only to find themselves in the icy clutch of 'Uncle Joe' Stalin, the poverty, the degradation, the starvation, the corruption, the almost universal misery of a nation, the bombed out cities, the abrupt violence that afflicts both young and old -- this bleak portrait put me forcibly in mind of Jerzy Kosinski's The Painted Bird, which is based on Kosinski's own experiences in WWII Poland. Both books make statements about cruelty and survival, but while Kosinski's book has an innate power that stems from the truths it contains, Steinhauer's book carries with it a small, almost hidden message of love and how survival may not be worth the effort without that love. Like Emil, the reader may have to do some searching to find it hiding among all the ugliness.

The pace of the book may not be slow, it may only feel that way because the repressive atmosphere, the nearly hopeless and blind way Emil must find his way through the maze of intrigue would perhaps depress some people. Ugliness and cruelty are never easy to endure. Nevertheless it makes for a fascinating read. Emil is perhaps the only fully fleshed character start to finish, but as he grows and learns then other people begin to reveal themselves to him and to the reader: The funny, out-of-touch grandfather who worships heroes but turns out to have nothing heroic about himself. Leonek Kerzian, the fellow cop most brutal to Emil, turns out to be an intelligent man who lives quietly with his mother. Brano Sev, the Soviet eye on the police force, turns out to be more insidious than first guessed at but also more helpful to Emil.

The world Emil lives in is really a character all its own, a landscape Emil is trying very hard not to completely internalize. It's less important who blocks Emil's efforts to investigate or why than it is to understand that the system which allows it exists everywhere and in everyone at once. It isn't the sudden appearance of a man who shoots Emil on a crowded street in broad daylight that is so horrifying, it's the apathetic response of a nation, the shrug of collective shoulders, to such events that chills the blood.

Give kudos to Steinhauer, a Texan, for his use of language. This book has the feel and sensibility of a European writer, so that there is almost the impression that the book was first written in another language then translated into English. Steinhauer has distanced his characters and thus the reader, from the casual nature that marks American fiction. In Emil Brod he has created a character who could never understand Americans or be happy among them. But this American was happy to keep company with Emil. And I'll be reading more of Steinhauer's work, so let me give a shout-out with gratitude to Seth Marko over at The Book Catapult for his review of the forthcoming The Tourist, which led me to seek out The Bridge of Sighs, Steinhauer's first novel.
at 9:22 AM 5 comments: