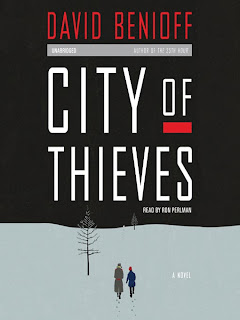 SYNOPSIS: During the siege of Leningrad in January, 1942, two young men face a daunting task. In a city of starvation, they must find a dozen eggs so that a Russian colonel's beautiful daughter can have a cake for her wedding. They have five days to find and bring back the eggs, and if they fail, they will be shot by the police, NKVD. The search for eggs will bring them face to face with everything that is both good and evil in humankind, and they will test the truth of what they believe about themselves.

REVIEW:Set during a relentlessly grim time and place, one might expect the same to be true of the story. Instead, Benioff has crafted a coming-of-age adventure tale that is by turns poignant, charming, frightening, and enlightening.

The adventures are not wholly unpredictable but are made fresh by the delightfully developed characters. Lev, only 17 and the son of a poet who was himself 'disappeared' by the NKVD, was accused of looting. His companion on the search is Kolya, 20, a soldier in the army. Kolya was accused of desertion. The two young men met for the first time when they landed in jail. They are both guilty as charged and yet neither of them has a criminal bent. Lev, the Jewish narrator, has spent his whole life knowing himself to be a physical coward. Kolya may have wandered away from the Army, but he is fearless to the point of stupidity. Kolya is also possessed of good looks, charm, and some higher education.

The author never makes the mistake of minimizing the suffering of that time, he faces squarely the violence and degradation of a place where survival is moment to moment. Yet he also understands that even in the direst circumstances, people can retain their sense of humor and can have dreams that are go beyond the basic needs of food and shelter. Lev longs to lose his virginity. Kolya is planning to write a great Russian novel. Each must learn to trust and rely on the other for survival, and their often childish bickering serves to distract them from their hunger, cold and fear.

From the monsters hiding among normal people inside the city, to beautiful women prisoners and resistance fighters and Nazi death squads beyond the front lines, the search for eggs takes Lev and Kolya into the heart of darkness and the spirit of light.

City of Thieves is fine entertainment, and no one could regret time spent in Lev and Kolya's company. In the following excerpt, Lev and Kolya have met a boy who tells them a wild story about a man who keeps chickens on top of one of the buildings in the city. This awakens Kolya's scatological fascination.


"The old man can't stay in the coop all the time," I told the boy. "He has to get his rations. He has to get water and use the toilet. Someone would have grabbed the chickens months ago."

"He pisses off the roof. When it's coming out the other side, I don't know, maybe that's what he feeds the chickens."

Kolya nodded, impressed by the old man's clever means of keeping the birds alive, though I was convinced the kid was making this up as his lips moved.

"When was the last time you had a shit?" Kolya asked me, abruptly.

"It's been nine days for me. I've been counting. Nine days! When it finally happens, I'll have a big party and invite the best-looking girls from the university."

"I will, absolutely. My shit party will be much better than this wedding she's planning."

"The new ration bread hurts coming out," said the curly-haired boy. "My father says it's all the cellulose they're putting in."

"Where do we find the old man with the chickens?"

"I don't know the address. If you walk toward Stachek Prospekt from the Narva Gate, you'll pass his building. There's a big poster of Zhdanov on the wall."

"There's a poster of Zhdanov on half the buildings in Piter," I said, getting a little irritated. "We're going to walk another three kilometers to find a bunch of chickens that don't exist?"

"The boy's not lying," said Kolya, patting the kid on his shoulder. "If he is, we'll come back here and break his fingers. He knows we're NKVD."

Kolya pulled the colonel's letter from his coat pocket and slapped the boy's cheek with it.

"This is a letter from an NKVD colonel authorizing us to find eggs. What do you think about that?"

"You got another one from Stalin, authorizing you to wipe your ass?"

"He'll have to authorize me to shit first."

I didn't stay long enough to learn how the conversation ended.