REVIEW: THE WOMAN WHO MARRIED A BEAR by John Straley 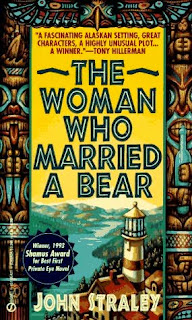 Occasionally -- as often as once a year if I'm lucky -  a kind of quiet excitement comes over me, an excitement caused by a magic blend of character, prose, setting, pace and story, all created by an author I'd not previously read. This silent bubble of joy usually indicates that I've just discovered a new favorite author to add to my growing collection. I had that feeling the first time I read books by Don Winslow, Robert Crais, Craig McDonald, Earl Emerson, Dave Zeltserman, Craig Johnson, Tony Hillerman, and Ken Bruen. Each of those authors has more than surpassed any hopes and expectations I had after first reading their work.

And now, courtesy of The Influence Peddlar, in a column he penned for Mulholland Books last year, I've felt that quiet excitement once again. In that column, Bruen mentioned John Straley in the same virtual breath as James Sallis and Daniel Woodrell. Heady company, that, but I'd never, ever heard Straley's name. But here's what Bruen said that made me add Straley's name to my TBR list:


James Sallis, Daniel Woodrell, John Straley, ostensibly in the mystery genre, are beyond any category. They write of the human condition in poetic, stunning prose. And do they engage in the debate as to what genre they belong? No, they just keep writing absolute gems of novels that will be read in fifty years’ time, fully appreciated.

When Ken Bruen says 'jump,' a knowledgeable reader's response should be to do just that: JUMP out of the easy chair and hie to the nearest bookstore. Okay, so it took me a few months, but today I finished John Straley's debut novel, which won the 1993 Shamus Award for Best First Novel, THE WOMAN WHO MARRIED A BEAR.

Marry the best of Raymond Chandler with that of Tony Hillerman; add a setting (Alaska) that is raw and seedy, racist and beautiful, and thread the story with symbolism. Toss in the articulate narrative of PI Cecil Younger, the black-sheep alcoholic son of a beloved judge. And every good PI has a sidekick, right? But I'd never met one like the emotionally and possibly mentally challenged Toddy. Mix this fine prose and the intriguing main characters into the culture of Alaska, its haves and have-nots, the macho hunters, the strong women, and the subcultures of Alaska's native peoples. Then add in the murder of an Indian hunting guide, a convicted killer who admits to the murder but who also hears voices, the suicide of the only defense witness, and the victim's bizarre, dysfunctional family. The result is a compelling, poetic tale that cuts closer to noir than to hardboiled detective fiction, and slices with a keenly honed edge. HIGHLY RECOMMENDED.

Here's an excerpt that gives a feel for Straley's talent for description and eye for irony:


There are some questions so graceful that they should only be asked, because at some point it becomes interruptive to try and answer them.

One of the most time-consuming questions asked in this part of the country involves where the "real Alaska" is. Most of the people living north of Haines consider southeastern Alaska to be a suburb of San Francisco, inhabited by drug-addled phoneys and bureaucrats, with a few loggers and fishermen holding on against all odds. The phoneys and the bureaucrats have an image of the modern white resident of the north as a 400-pound Oklahoma building contractor with a 50-pound gold-nugget watchband and an antebellum attitude toward the darker races. Anchorage falls in the middle of this mess.

Anchorage grew up too fast to keep pace with its ability to dress itself. Today its buildings mostly resemble monumental subarctic toasters, all reflective surfaces to steal the beauty of the surrounding landscape.

Anchorage is hip deep in the twentieth century. In a downtown bar you can find a deranged redneck watching a Rams game on the wide-screen TV alongside an arts administrator who is working on a production of 'Waiting for Godot'' to tour the arctic villages. Both of them will walk around the Eskimo man bundled up asleep on the sidewalk, but the arts administrator will feel an ironic sense of history.