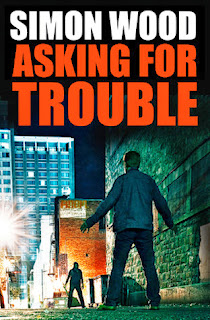 I'm about to pay Simon Wood a very great compliment. His work reminds me of Roald Dahl's short stories. As a rule, comparing one author to another is odious, particularly as such a comparison seems to carry an inference that one author is trying or should be trying to be more like the other. Well, get that nonsense out of your head. Wood is not mimicking Dahl, nor do I think he should make the misguided effort to do so. What I'm saying is that Wood's ability to spin the commonplace into the quirky and then into the deadly puts me in mind of Dahl's gift for the same. That kind of talent will always draw me back to an author's work.

In Wood's newest collection of short crime fiction, ASKING FOR TROUBLE, he delivers eight stories built around the idea that a crime always begins with a decision -- the wrong decision. But not every bad decision is made by someone of a criminal bent. In Making Ends Meet, the bad decision arises when Richard, a very ordinary man, cannot face the idea of supporting his spendthrift, mooching in-laws for the rest of his life. But Richard cannot say no to his wife, so what's a guy to do? The character of Richard is so sympathetic, his in-laws so not, that the reader is impelled to support Richard's bad decisions. But bad decisions are called that for a reason. They have a way of rebounding upon the decision-maker.

Just how could wanting to turn one's life around, to get onto the straight and narrow, how could that be a bad thing? Just ask Matt, the protagonist of The Taskmasters. Matt has a tendency to get into bar brawls, and even he knows that if he continues down that path, the end won't be good. But The Taskmasters aren't your usual Twelve-Step group. They've got a unique spin on how to get your act together, and they make cults look like a good idea.

In The Hooker, a bridegroom and his best man turn one bad decision into a never-ending string of such, and the groom learns a lot about his darker nature along the way. Dinner for Toby offers a pretty good reason why experiencing everything at least once is an obsession to be avoided. And in A Gun in the House, when Leah decides that not even a persistent intruder can force her to move from her beautiful but isolated house, it becomes a decision that will cost her more than the house.

Simon Wood is an Anthony Award-winning author who is also a licensed pilot and a former racecar driver. ASKING FOR TROUBLE is available in ebook for only $2.49 USD from Smashwords.
at 2:05 PM