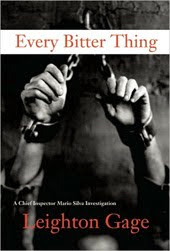 The son of a high-ranking Venezuelan politician has been found dead, shot in the abdomen and brutally beaten, in an apartment in Brasilia. Chief Inspector Mario Silva of the Federal Police is called to investigate, and the pressure is on to bring the case to a quick resolution: Find the killer and keep the baying politicians at, well, bay. But Silva is too wily a politician himself, and too good a detective, to allow the pressure to get to him. A good thing, too. Within 24 hours Silva has found the same MO used in four other murders, each occurring in a different city. The only link between the victims is that each was aboard Flight 8101, Miami to São Paulo, on the same day four months earlier. Then Silva discovers two more victims, one killed using the same MO as the others but who was not on that flight; and a 15-year-old boy who was on the flight but died of a head injury in a jail cell within hours of his arrival in Brazil. Silva and his team of detectives have their hands full collecting evidence and testimony from all over Brazil and Miami, as well as warning possible future victims. But the killer isn't waiting around for them to do their jobs. The killer keeps killing.

I confess to being a tad fussy about crime fiction whose locales are non-Anglo countries. It isn't that I won't read such books -- I love Roger Smith's books set in South Africa, and Arnaldur Indridason's Icelandic mysteries, and so on -- but only that I often find an author will drench the reader in this other culture and land at the expense of story and characterization. A reader can spend more time trying to adjust to cultural nuances and sorting out names and locations than in simply enjoying a good story.

I'm happy to report this is not the case with Every Bitter Thing, by Leighton Gage. And yet Brazil is not simply an incidental setting; the reader will still enjoy a good taste of the Brazilian landscape and culture. But Gage weaves these things into his mystery so that they are truly a part of the story's fabric, all of it necessary, intriguing, and sometimes funny.

Told in third person, with limited subjectivity, what the reader learns about Silva and his team is only what is displayed on the job. We are not treated to their home lives and personal woes except insofar as they are referred to on the job. The team is just that, a team. They have a camaraderie born of experience and a mutual desire to get the job done, and done right. Honorable and upright, they disdain the corruption, laziness, and brutality they see throughout much of law enforcement. The team is: Arnaldo Nunes, a smart-ass of the first degree; nimble of wit but not an infallible interrogator. Haraldo 'Babyface' Gonçalves, he's thirty years old and looks a sweet and innocent twenty. Women tell him everything, but he's probably the most superstitious cop in the country. Hector Costa, Silva's nephew and a rising star in law enforcement, Hector heads up the Federal field office in São Paulo. And Silva himself, unflappable, far-sighted, and possessing the intangibles that make for great leadership, including a good sense of humor.

In some ways the story structure put me in mind of Ed McBain's 87th Precinct stories, as Gage rarely strays into the private lives of his cops, and yet makes fully-fleshed characters of each of them. The dialogue is snappy but not just for the sake of it. The snappiness is a result of the team's experience with each other and with other cops and citizens, and the dialogue either moves the plot forward or reveals something about the character speaking. Gage never becomes overly graphic or too lovingly dwells on the violence, nor does he involve the reader in tedious forensic explanations. The pace is quick, the atmosphere slightly hardboiled but leavened with cop humor. The reader may guess the killer's identity mid-way through the book but that won't make the team's procedural search any less entertaining, and the epilogue has such an eyebrow-raising twist that the reader is forced to stop, say 'whoa,' and completely reevaluate Silva and his team. I enjoyed this book so much that I've started back at the beginning of the series, and now have only one more title to read. I'm going to hate waiting another year or more for another book from Gage.

In the following excerpt, Silva and Arnaldo Nunes have arrived at the scene of the first murder. A civil cop, homicide detective Walter Pereira, is to fill them in on what the police have found so far but Pereira wants to talk about Silva's incompetent boss, Sampaio:


"What's with you," Arnaldo asked.

"Your goddamned boss is what's with me," Pereira said. "He's doing his dog and pony show as we speak. There's a television in one of the bedrooms. Want to have a look?"

"Not on your life," Arnaldo said.

Silva bent over to look at the damage to the apartment's front door.

Pereira shook his head. "We did."

Silva studied the floor. A trail of blood stained the carpet.

"Let's not get off the subject," Pereira said. "Your goddamned boss–"

Silva waved a dismissive hand. "You don't have to tell me, Walter. I work with the man."

"Of course he is," Arnaldo said. "His public demands it."

"His public doesn't know shit. They think the blowhard is a twenty-first-century Eliot Ness. What kind of a background does Sampaio have in law enforcement anyway?"

"None whatever," Silva said. "He was a corporate lawyer. He made a substantial contribution to the president's election campaign. The rest, as they say, is history."

Pereira finally broke into a grin. The teeth under his mustache were movie-star white.

One more note: Leighton Gage is a regular contributor to the Murder Is Everywhere blog. His co-contributors include Timothy Hallinan, Cara Black, Dan Waddell, Yrsa Sigurdardottir, and the writing team of Michael Sears and Stan Trollip, aka Michael Stanley.
at 9:16 AM