ABIDE WITH ME by Ian Ayris 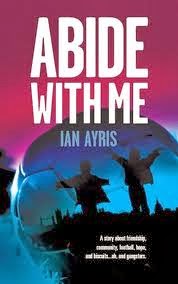 Johnny and Kenny are 10-year-olds living across the street from each other in London's East End. Neither family has much money but these boys' lives couldn't be more different. Kenny, vacuous and obese, with his relentlessly brutal father and his doormat of a loving mother; and football-mad Johnny, with two loving parents with excellent work ethics and a little princess of a baby sister. Despite Kenny's hygienic deficiencies and passive demeanor, the boys become friends and remain so until Kenny's passivity cracks one day and he is sent, as Johnny says, "to the nutter." The years, then a decade rolls by. Consumed by a family tragedy, Johnny makes some bad decisions for which he pays a heavy price. Just when Johnny is finally ready and able to try to correct the course of his life, Kenny reappears, still dirty, still vacuous, and now getting his food from trash bins. And Kenny's also in a world of trouble with the local mobster, and so is Johnny's mother. The pressure is on Johnny to help the mobster deal with Kenny. If Johnny tries to help his old friend, neither he nor his family will live to see another sunrise.

ABIDE WITH ME, by Ian Ayris, is a remarkable first novel. It is so very good -- and it's almost scary to say this author has the potential to be even better -- that even though I was familiar with the quality of Ayris's short stories, I was poleaxed by both story and writing in ABIDE WITH ME. Writing in the first person of Johnny, and in the East End vernacular, the author admirably maintains the voice of the character while allowing him to age and mature -- or not -- over the ten or so years of the story. The character is street-wise but not callous; occasionally daring but by no means fearless. Ayris guides his narrator through the pre-teen and teen years with a keen eye for the self-absorption and animal instincts of youth. Ayris' particular talent, though, is in defining and revealing the small, quiet tragedies in the lives of the less-than-affluent. And the book just shines when he juxtaposes those private griefs against public shame and personal pride.

I'm not ashamed to say that the story of Johnny's and Kenny's friendship moved me to tears. Although good arguments can be made that the themes include what it means to be a hero or an exploration of one's place in a community, the overriding theme surely is what does it mean to be a friend. Throughout Johnny's narration, as we see his narrow world through his young eyes, we come to think as Johnny does: that he is a steadfast friend to the hopelessly and uselessly blank, somewhat repellent Kenny. But it is Kenny who, by story's end, exemplifies what it means to be a friend, as well as what courage and gratitude can be.

I'm going to startle more than a few of you, possibly even the author, by saying this book stands comparison to books by Liza Cody and -- ready? -- Ken Bruen. No joke. No exaggeration. ABIDE WITH ME has the same clarity of voice, the same dark humor, as well as a poignancy that wrenches and moves the reader. Ayris may even go a bit further in capturing a vivid slice of life that rings true to this Yank. This is not a book for those who like a bit of bloodletting in the library with their tea and crumpets. This is a gritty, altogether human story of tragedies both quiet and public, in a world where paradise means your football team is in the finals and where getting out and up never even crosses the mind.

Here's an excerpt in which a shaken-to-the-core Johnny has just endured tea, for the first and only time, at Kenny's house, and there witnessed the abrupt and terrible violence Kenny and his mother suffer as a matter of routine.

And that was tea at Kenny's. I didn't tell Mum nothing. Said I pissed meself on the way home from school. She says not to worry, and gives me a kiss on the head. That's when I started bawlin me eyes out.

Come night time, I'm lyin in me bed. Can't sleep. Been tryin to close me eyes for ages, but soon as I do, I see Kenny's old man cryin his heart out and Kenny shufflin about the floor pickin up jam sarnies, and all over there's the sound of his old girl screamin.

***
Mum and Dad's downstairs. Mum's laughin. Probably something on the telly or Dad's told her one of his stupid jokes, something he'd picked up in the factory or out the boozer. Becky's movin about in her cot like she can't sleep neither. She's breathin heavy, sort of two at a time, like she's cryin. But she's not. It's just how she gets sometimes.

Can't get Kenny out of me head still, thinkin about him across the road, tryin to get to sleep. And I'm thinkin what I'd do if I was him. I know I wouldn't fuckin be puttin up with it, that's for fuckin starters. I'd be workin out how to have it away on me toes first thing, like that Dick Whittinton geezer. I'd do the old man in before I went, an all. Get a gun or something. Blow the bastard's head off.

The stairs start creakin. Door opens. Mum comes in to check on Becky, and I squeeze me eyes tight shut. I can hear Mum whisperin to Becky and singin soft, probably strokin her hair and her cheek, an that. She's right gentle, Mum. Then I can hear her footsteps comin over to me. I close me eyes even tighter. Don't wanna talk about what's in me head, you know, doin away with Kenny's old man. Mum feels me forehead, and gives me a kiss there. Then she gets a tissue and she's wipin me eyes and she's wipin the tears off me face. She cups her hand round me cheek, and I know she's lookin right into me. Gives me another kiss on the forehead and I know I'm cryin now cos I can hear it in me throat. But I won't open me eyes, not even for Mum. I'm willin for her to go. And when she does, when the bedroom door shuts tight and the lights go out, I want her back all over again, just so she can stop the screamin in me head.

***
As for Kenny, next day at school, all week, I got an empty fuckin chair sittin next to me.