Tom Llewellyn, a guest blogger? Here? Are you kidding me?

Yes, here. No kidding. It's long past time that The Drowning Machine suffered endured presented proudly presented our first-ever guest blogger. And in scouring about to find just the right first guest, it occurred to me that securing a world-famous bestselling writer of crime fiction would be a too obvious thing to do, having already been done to perfection, more than once, by Jen Forbus. So I cast my eyes about for someone a tad less famous, someone who could do funny, sassy, irreverent, and inappropriate on demand. And didn't have an ego. Out of the flood of responses one can expect to milk from a craigslist ad in search of such qualities (at least before that website shut down its Adult Services Section), one bit of cream floated to the top.

Please welcome Tom Llewellyn, YA author (The Tilting House), book blogger (but not in the usual sense of that term, as you will learn), and guerrilla letterpress artist (a whu--?). His mind is kind of -- skittery, but really, he's harmless enough. I think. Take it away, Tom:

I wrote a book recently. A kid mystery novel called “The Tilting House.” Drowning Machine reviewed it in June. After months of constant whining and badgering, Naomi was kind enough to let me shill my wares here, because, to quote “Hustle and Flow,” “It’s hard out here for a pimp — err, author.”
On writing kids’ books containing dead bodies:
I recently read The Book of Genesis, as illustrated by R. Crumb. The words are straight from the Bible, unabridged. I was shocked by how jam-packed with sex and violence the story was. I realized that for most of my life, I’d been ripped off by the Sunday school version of the story, which stripped out all the murders and such. No wonder kids don’t want to go to church.
Kids’ mystery books often do the same thing. They take out the precise parts of the books kids want to read, leaving behind all the parts that parents assume are good for children. In other words, the boring parts.
That’s why I was so happy when Publishers Weekly reviewed my debut novel, The Tilting House, and declared it, “A cross between Goosebumps and Twin Peaks,” and said “Llewellyn's debut is inventive, gripping, and shot through with macabre details.” “Macabre” and “details” are two of my favorite words! And PW is right. The second chapter of the book is about revenge. The fourth chapter includes the suspicious death of a main character’s stepdad. The fifth chapter is just one big amputation story—who doesn’t like a good amputation? And the overarching mystery is about a body buried in the crawlspace.
Is the book too creepy for kids? Hell, no! I’ve given author talks to at least a couple of hundred elementary age kids who’ve read the book and they all love the parts I just mentioned. Why? Because kids, just like grown-ups, deal with the same fears as the rest of us. They fear the dark. They’re afraid of dead bodies and murder. And we all know that, within our human brains, the flip side of fear is fascination. Hence, crime novels for grown-ups and books like this for kids.
On consecutively working within three levels of publishing technology:
Level one: moveable type
One obsessive side project of mine is called Beautiful Angle, where my co-founder and I create letterpress posters, using wood and lead type and a circa-1950s hand-crank printing press. Our distribution method is purely local—we staple and paste the posters on telephone poles and buildings around town. What has it taught me about writing? Limitations are your friend. With letterpress, we can only write words we have letters to print. When we run out of E’s, we need to change the words. But a smaller sandbox often makes for greater creativity.
Level two: traditional publishing
It took me four years, from submission to release, to get The Tilting House into stores. Once done, it was exhilarating. Along the way, my primary thoughts were fear and frustration. But the process—all the revisions and all the guidance of my talented editor, the esteemed Abigail Samoun—certainly resulted in a better final product. I learned that writing is not a solitary process. Editors make a huge difference.
Level three: blogging
In a desire to speed up the process, I decided to write a book via blog: Letter off Dead. Soon I was averaging over 10,000 unique visitors a month. I loved getting words directly to an audience with no middle man. I loved the immediate feedback from followers. I had no idea how to make a dime off the thing — after 10 months of Google ads I’d cleared eight dollars. But in the end, my publisher picked up the work and offered to publish it traditionally. So the only way I could figure to make a buck off a blog was to get it published the old-fashioned way.
Thank you, Tom, for sharing your kattywompus path to publishing your second book. And in case anyone is too busy/lazy to click on that link to Beautiful Angle, or you somehow managed to resist the impact of that fabulous graphic at the top of this post, take a peek here at just a couple more of my favorite posters Tom has co-created. This guy has a created whole new sub-sub-genre: Poster Noir. 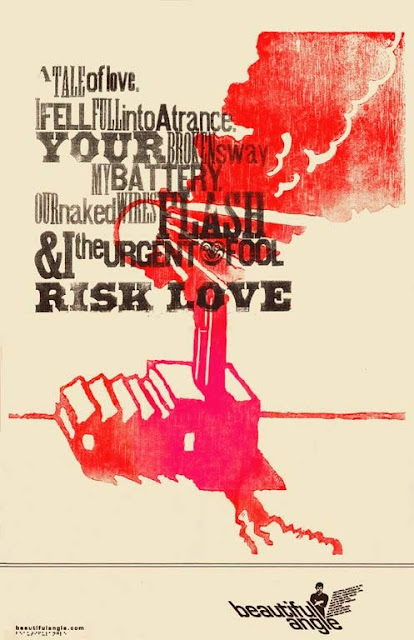