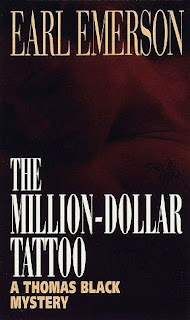 Welcome to day two of Detectives Around the World Week, sponsored by Jen's Book Thoughts. As many of you correctly guessed yesterday, The Drowning Machine is celebrating fictional PI Thomas Black, Seattle. Thomas Black is the creation of a great story-teller, Earl Emerson.

Before I talk about Thomas, just a reminder that you'll want to come back every day this week from now through Friday for a chance to win a copy of Emerson's Cape Disappointment and a $35 gift certificate courtesy of  Aunt Agatha's New & Used Mysteries, Detection and True Crime Books, our Indie Store of the Month here at The Drowning Machine.

Thomas is an ex-cop who took a disability pension after he inadvertently shot and killed a teenager he thought had a weapon. This quick-witted, bike-riding PI has been the lead investigator in twelve novels, spanning a publishing time frame of 25 years. Thomas first appeared on the crime fiction scene back in 1984's The Rainy City, and he knows his way around the streets, mean or otherwise, of Seattle. And author Earl Emerson knows those streets very well indeed because he's a full-time firefighter with the Seattle Fire Department. Fans of Emerson, stay tuned this week for an interview with one of the most candid and interesting authors I've ever had the pleasure of chatting with.

The second novel in the Thomas Black series, Poverty Bay, won the 1986 Shamus Award from the Private Eye Writers of America for Best Original PI Paperback. Guess who one of the other nominees was in that category that year? Uh, yeah, Earl Emerson, for The Rainy City. Poverty Bay also was nominated for an Edgar that year.

The following year, the third book in the series, Nervous Laughter, was also nominated for a Shamus. Two short years later still, Deviant Behavior, the fifth Thomas Black mystery, was nominated for Best PI Hardcover, and in 1996, The Vanishing Smile, TB #8, also collected a Shamus nomination. In 1998, it was Deception Pass that got a nomination. And let me note that the other nominees that year -- non-winners also-- included Robert Crais for Indigo Slam and Sacred by Dennis Lehane. So you can see that as a writer Emerson has been keeping exclusive and highly-regarded company for a long time. Yeah. So those of you who haven't discovered this fine series, go ahead and kick yourself now. I'll wait.

Book nine in the Thomas Black series is The Million-Dollar Tattoo. Corey selected this book several weeks ago for the Detectives Around the World blog fest, because he liked the connections between this book and the the most recent book in the series, Cape Disappointment, which will also be reviewed later this week. Those connections have to do with twin brothers who see conspiracy all around them. I was happy with Corey's selection just because this is one of my favorite entries in one of my favorite mystery series. Tattoo is a fun and funny story, and still manages to address a topic which is still relevant in the have/have not culture of modern America. And, as is his wont with the entire series, Emerson shows the reader many intriguing facets of Thomas Black's hometown: Seattle, the rainy city.

THE MILLION-DOLLAR TATTOO
SYNOPSIS: Hard-drinking, gunslinging PI Elmer 'Snake' Slezak woke up at 4 am to pee and found he had a much bigger problem than a full bladder. That PYT sleeping next to him? Dead. Strangled. Snake is just awake enough to call his fellow PI Thomas Black for help. Snake swears he didn't do it. Thing is, he also swears she's an alien. Not alien as in immigration status; alien as in from outer space. He knew her only as "Seventy-Three." He also swears that he's been sleeping with a whole bunch aliens as part of an intergalactic breeding program.

Thomas naturally concludes that the paranoid and highly volatile Snake has gone completely 'round the twist, but Thomas's wife, Kathy, a criminal lawyer who is ever-sympathetic to someone in trouble, agrees to represent Snake even though she can't stand him. (He might have goosed her once.) The result is that Thomas has to work this like a real case, even though he thinks Snake probably killed the woman in a drunken bout of paranoia and doesn't remember doing it.

It isn't long before Thomas finds himself interviewing everyone from a homeless guy Snake was feeding to a power-tripping corporate front-man who just might be ex-MI-6. Mysteries Thomas must investigate include the a tattoo of a butterfly, which all of the "aliens" had - except the dead one. And whether there really are dwarfs in a Buick following Snake. And what's the deal with the multinational conglomerate waving big bucks and insisting that Thomas drop what he's doing and come to work for them immediately? And who is the mysterious man who comes through with bail for Snake?

REVIEW: Snake Slezak has to be one of the most colorful PIs in fiction. He darned near steals the show from Thomas and Kathy in this book. That's not easily done because this PI-and-lawyer husband-and-wife team give off Nick'n'Nora-type sparks with their flirtatious wit and sexual banter. Snake is a confident, ex-rodeo rider, and a shameless womanizer;  he's also hopelessly un-PC, paranoid, devious, impetuous, blunt-spoken, and a heavy drinker who loves guns. How do you suppose a guy like that could ever end up in trouble?

Thomas is none of those things, except for confident. He's athletic, in love with his wife, good humored, and rarely feels the need to tote a firearm. But, boy, is he relentless with a puzzle. He also doesn't take to being pushed around, and once Thomas starts digging into the events leading up to the murder in Snake's bed, the pushing and shoving start to get out of hand.

Of course, just because Thomas doesn't like getting pushed around doesn't necessarily mean there aren't some characters big and bad enough to do just that. Thomas is no superhero, he isn't even a Jack Reacher wannabe. He's close enough to being an everyman that readers can identify with him but not so close they could be bored by him. There is a scene in a supermarket where one of those bigger, badder characters begins to take Thomas to pieces, our PI having unwisely interfered in a violent domestic dispute. For many authors this would be a standard action sequence. In Earl Emerson's hands, this is an opportunity not only to further the plot but to leaven the drama with a large dose of hilarity as Thomas discovers the near-addictive joy of wielding, however carelessly, a Taser-like electroshock weapon.

Thomas's wife, Kathy, has the level-headed qualities a reader expects in a criminal attorney, but she's also attracted to the action that occurs around Thomas. She's a welcome change from the cliched female romantic figure in PI fiction; you know, the woman who gets bent out of shape because she's in fear every time the PI she loves faces danger, and is always threatening to leave him (and sometimes does).

That's not Kathy. She's always known what Thomas does for a living, and she has no interest in changing him. And if something is going down, she wants to be there. She's no over-the-top kick-ass karate expert or anything like that but she's smart and she's not a wuss. She's clearly her own woman, and not a female version of her husband, although her sense of humor is a perfect match for his. (Too bad Elvis Cole didn't meet this lady-lawyer before that he hooked up with that other one.)

Earl Emerson has a talent for creating characters not just believable and interesting but also easy to see in your mind's eye. And yet the villain of this piece, nameless here in order to avoid spoilers, is not so easily seen, even though Emerson puts that character squarely in front of both Thomas and the reader. Emerson also keeps control of the pace, with plenty of twists and turns to keep the reader laughing and guessing. Transitions are made smooth by Thomas's humorously masculine POV. This is a fine, fun mystery and the underlying theme of unchecked power is handled with finesse. Emerson is a gifted storyteller who won't scare readers into paranoia or strew blood and guts all over the pages, but will keep them turning those pages.


He was reputed to be Tacoma's sleaziest investigator, but if you knew him well, you knew the label wasn't entirely accurate. He was dirty-minded, opinionated, and cantankerous, but he had plenty of empathy for his clients. He'd once broken into tears over not locating a fifteen-year-old runaway, the daughter of a Boeing engineer, a girl he'd discovered had been sexually abused by a half-brother and was now hooking somewhere along the coast. More than once he'd loaned cash to clients who hadn't been able to pay their bills.

Among his preferred hobbies were shooting rats in the county dump, homophobia, catching bullets in his teeth, and moral superiority, though his real passion was, as he put it, "chasing pussy."

With bricks in his pockets he weighed in at a hundred twenty-five pounds, and perhaps because of his Lilliputian stature, he was feistier than he needed to be. The hardest I ever laughed was in a bar in San Diego when he got the crap knocked out of him by a one-armed woman who'd retired from the Roller Derby. During the scrap he'd pulled off her prosthesis and was drunk enough to think he'd pulled off a real arm. He bawled about his own brutality even as she threw him across the floor with her good arm. The brawl lasted six or seven minutes, and Snake never got in a single lick.

THE CONTEST
You have more money than you can count. You want to buy a million-dollar tattoo. (Shut up. You DO.) How many US treasury notes bearing this image will you need to make your purchase? 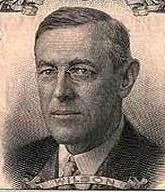 Post your answer in the comments any time before tomorrow's post. Then come back every day this week to find a new puzzle and post your answer. Everyone who posts a correct solution to each day's mystery will be entered into a drawing for a wonderful prize. The more puzzles you solve, the more chances you get to win. For example, if you post the correct answer to three out of the five puzzles this week, you will have three chances at the prize. And naturally, you must post your correct solution before the answer is revealed in the following day's post, or it won't count.

The winner will receive a copy of Cape Disappointment, the most recent book featuring Thomas Black,  and a $35 gift certificate courtesy of our Aunt Agatha's New & Used Mysteries, Detection and True Crime Books, in Ann Arbor, Michigan. Aunt Agatha's just happens to also be the Indie Store of the Month, Whenever you're in or near Ann Arbor, Michigan, be sure to visit.

Also, remember to check Jen's blog for the schedule of events honoring Detectives Around the World Week all over the crime fiction blogosphere this week.  I bet somebody else is giving away freebies, too!
at 5:44 AM

Email ThisBlogThis!Share to TwitterShare to FacebookShare to Pinterest
Labels: Detectives Around the World, Earl Emerson, Review