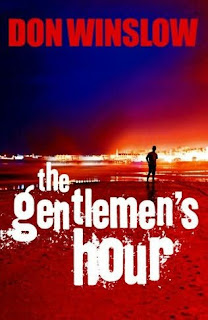 SYNOPSIS: Boone Daniels divides his time between surfing and private investigating. He'd much rather be surfing full time but he has to work two cases, neither of which he wants: A buddy wants him to find out whether said buddy's wife is cheating on him; and Boone is also looking into the open-and-shut case against a spoiled rich kid who admits to killing one of the most admired men in San Diego and a personal hero to Boone and his surfer friends. It's the latter case that is costing Boone the trust and life-long friendships of the Dawn Patrol, the men who surf the early morning hours at Pacific Beach, but it's the former case that may cost Boone his life.


REVIEW: How many crime fiction authors can you name in relation to Southern California? Several, right? Several ranging to perhaps too damned many. Because after you've read Chandler, Crais, Connelly, and Parker, where are you going to find a writer who brings something new to the SoCal crime fiction genre?

Look no further than Don Winslow. Remember that name: Don Winslow. His name is probably the best kept secret in crime fiction, and that's a damned shame.

One of the things that Winslow does differently than those other very talented writers is to place his protagonist in a world of close-knit friends. How is that different, you ask? Well, if Harry Bosch joined Facebook, how many friends would he have? That's right, zero. He's got loads of acquaintances, no friends.

How about Elvis Cole? Yeah, he's got Joe Pike and Lou Poitras. Exactly two friends; you wouldn't really call Lucille Chenier a friend to Elvis, would you? And heaven knows Phil Marlowe wasn't tripping over friends every time he left the office, while Parker's latest cop lead, Charlie Hood, doesn't exactly have a posse either.

But Boone Daniels has many friends. For starters, he has the entire Dawn Patrol, a half-dozen or so guys who surf together, hang out together, and have each other's back come what may. Right up until Boone starts working for Corey Blasingame's defense lawyer. Corey didn't kill just anybody, he killed a guy who was a surfing legend. Killed him for no reason and confessed. There are witnesses: Corey's fellow gang members and a couple of bystanders. Everyone says Corey did it. Hell, Corey, a budding neo-Nazi, says he did it. But Boone doesn't buy it, he thinks Corey has neither the guts nor the physicality to have committed the crime, and he begins to dig into Corey's life.

And this is the one thing that all of Boone's friends cannot and will not accept. By even trying to find mitigating circumstances for Corey, Boone has betrayed his friends, the community, and worst of all, the victim. Because the victim wasn't just one of them, the surfing crowd, he was the best of them. Best on the board and the best in life. Not only that, but if Boone does find anything the cops missed, it's probably going to put paid to any career hopes that Johnny Banzai, Boone's oldest and best friend, has in the police department.

This falling out among friends couldn't come at a worse time for Boone, as his other case, the marital infidelity case, erupts in murder and Boone is on the spot for it, either as the trigger-man or as an accessory to murder.

And it is this complex overlay of work and friendships that is one of the major points of difference between this book and most other SoCal crime fiction. The only other book I know that thoroughly works this particular complication is Crais's LA Requiem, and if a book can stand comparison to that particular classic then you know you've got your mitts on one heckuva story.

Add in that Winslow knows surf jargon and uses it judiciously; add in a sense of humor that leavens the darker sides of this story (Boone trying to decide how to dress for what may or may not be a booty call is hilarious); add in minor characters with major story effects; add in the maturation of the lead character without losing any sense of what that character has always been about; add in that Winslow writes in an unpretentious yet unabashedly masculine style that never crosses the line into buffoonery; add in well-executed pace and tension, and the sum total is a terrific story that will get its hooks into you and cause you to grieve, as Boone does, for the deteriorating world not only of the surfers but of everyone who ever lived by a code of honor and respect. Say adios to Moondoggie and Gidget; the skinheads have staked a claim to the beaches. And what land the skinheads aren't fighting over has already been forfeited to the real estate developers. What Winslow says about that latter group and their hand-in-glove corruption with local officials, well, he may not be saying anything new but he sure says it with force and conviction.

I have to address one last crime in regard to this book. The last time I checked, The Gentlemen's Hour was not available for purchase in the US, and won't be until 2011. Now that's criminal. Try the UK if you don't want to or can't afford to wait that long. And the only positive thing I can say about the idiocy of waiting so long for a US release is that it gives unaware readers a chance to pick up the first of Winslow's Boone Daniels books, The Dawn Patrol. Good as that book is, it is but an appetizer for the reading feast that is The Gentlemen's Hour.

(For those who might be interested, Dick Adler has a recent post at The Rap Sheet that has some interesting info about what Winslow is up to these days.)

Disclosure notice: A copy of this book was loaned to me by a friend. I get no remuneration from writing about this book. But if the enjoyment I received from reading this book could be translated into dollars, I'd be as rich as any of those Wall Street fat cats.