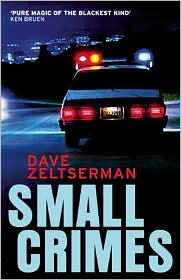 SYNOPSIS: Joe Denton is fresh out of jail. Crooked cop, cokehead, world's worst gambler, lousy husband, father, and son; Joe's just your every day, basic, all-around useless guy. Joe just wants to make amends for some of his bad acts, but nobody wants him to stick around long enough to do that. Except for those people who want him around long enough to (a) kill the local mobster, or (b) kill the local DA. In between making that no-win decision, Joe bides his time getting shot at, beat up, coked up, kicked out of his parents' house, shut out by his ex-wife and kids, nearly busted for rape, assault, and cocaine use... Yeah, Joe's keeping so busy he missed that appointment with his parole officer. But he's got his good buddy, the county sheriff, to lend a hand. Yeah, a hand that wants to push Joe right into a coffin. But, hey, none of this is Joe's fault. Right?

REVIEW: Maybe it's cheating but the easiest review to write for this book is simply to say, if you're a fan of Jim Thompson's brand of psychotic noir then you're gonna fall dead in love with Dave Zeltserman.

There is a simplicity to Small Crimes that is reminiscent of Thompson's The Killer Inside Me. It's only in the first-person POV and the linear construction of the book, along with the unravelling personality of the protagonist, that harkens back to Thompson though. In all the ways that matter, Zeltersman made the story darkly original, fierce, and occasionally funny; and he populated it with characters both sympathetic (Joe's parents, the DA) and fearsome (Sheriff Dan Pleasant, the mobster's son), and some that are more than a little offbeat (Nurse Charlotte Boyd).

The plot is nicely intricate, and Zeltserman does a fine job of never letting the pace either get scorched or go slack. By the end of chapter three, the tension is starting to ratchet up and no matter what Joe does from there on out, he's boxed in and the box is only going to get smaller. Way tiny. Coffin close.

Fact is though, good as the plot and pace are, this book is all about one character: Joe Denton. Joe is a fascinating guy, all right, not that you'd ever want to be a pal of his or anything. Most people see Joe for what he is, it's only Joe who doesn't quite get the picture. And since the reader sees everything through Joe's eyes, then you'd be correct in thinking that I had a touch of myopia myself regarding Joe. His sins, his attempts at redemption, even some acts of heroism, none of these compare to Joe's self-betrayal. And since he's pretty much the only guy on his side anyway, you know things are going to get ugly. And ugly, as we all know, makes the best noir.

Zeltserman's next book is Pariah, out this month in the UK, and Ken Bruen has written a paean to it. I don't think I can wait for a US publication.
at 4:57 PM