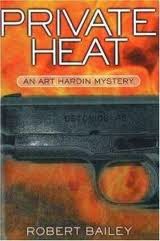 When Michigan PI Art Hardin is hired by her lawyer-uncle to protect Karen Smith from her abusive husband, who just happens to be a cop, he expects the worst. Karen can't flee her husband because she's wearing a government-issued ankle bracelet: um, something about a half-million dollars in an off-shore account and a boss with a bullet in his brain. What Art gets, and gets fast, is framed for murder. Then there are the matters of a hatchet attack on Art, Karen's uncle getting firebombed in his car, Russian hit men, money launderers, killer cops boating on the lake outside Art's house, and did I mention the missing $11 million dollars? No? Well, somebody has it. And a lot of people want it. Most of them want Art dead, too.

In the spring of 2006, my indie bookseller recommended I read PRIVATE HEAT. Boy, did he ever nail that one. A tightly wound plot that fairly explodes off the pages, and a PI with humor and heart -- what's not to like? I ate it up with a spoon and went right back for the sequels. The book was a nominee for the 2003 Shamus Award for Best First Novel, and deservedly so.

Art Hardin isn't your typical loner PI. Nope, he's not Marlowe or Spade, too cynical to ever fall in love. And he's not Spenser, with a long-running relationship in which the parties never fully commit to a life together. No, Art is a middle-aged married man with two teenaged sons and a third son who is himself married. He has a no-nonsense wife named Wendy who runs her own business, and a receptionist-bookkeeper-landlady who he has to beg lunch money from. He also has a dog that has to be force-fed his daily meds. Most of Art's income is derived from insurance claims, and he does okay but he'll never get rich. It's impossible not to like Art because of his spirited nature and his never-fail sense of humor. In a zinger contest, he could easily go retort for retort with Elvis Cole.

It isn't just that Art's a funny guy. He's funny-smart. He's ahead of the Feds, ahead of the local constabulary, and well ahead of the reader. That means sooner or later he will catch up with the bad guys, who aren't so stupid themselves. Does he have a "code" like Spenser? Mm, maybe. He doesn't advertise it or thrash it out with his lady love as Spenser does, but when nobody's there to pick up the tab, Art continues to protect Karen, even after the hatchet job she tried on him. Art probably doesn't think of it as a personal code; he just knows that if he doesn't help her, she's going to be killed. In one of the funniest, most action-packed scenes in the book, a comatose Karen is kidnapped by a phony pair of EMTs. Art steals a ride in the back of the ambulance as his backup rushes to catch up. (Yes, he has backup. I told you he was smart.) The killers' plans for Karen are gruesome but Art manages to hide her (yes, hide her. In a moving ambulance. I told you he was smart.) and takes her place on the gurney. If people weren't shooting at each other shortly afterward, the whole thing  would play like a Marx Brothers movie. Funny AND exciting.

The puzzle is intricate, as good puzzles are that involve money-laundering, but the author makes it all come out in the, uh, wash. (Don't hit me for that pun!) PRIVATE HEAT is a rousing good read as Art vanquishes both the bad and the good guys, does so with style and wit, and the reader has a fine old time in the process.

PRIVATE HEAT and the other two Art Hardin books, DYING EMBERS and DEAD BANG were recently released in Kindle format; clicking on any of the titles will take you to the right place. And if you'd rather try Robert Bailey's work in a smaller, less expensive work, he has a short story, featuring Art Hardin, called THE SMALL MATTER OF TEN LARGE available for only 99 cents. Give it up, the dude is good.

Here's an excerpt from PRIVATE HEAT that will in no way spoil any plot points for you. In this scene Art -- who was arrested for murder and has just been released -- and a colleague, Ron, meet a potential new client, the rather odd Mr. Dutton.. Marg is Art's receptionist. Here's the description of Dutton, followed by the gist of his conversation with Art.

Marg sat, busy at her desk, looking sharp in a brown-checked suit and a tan silk blouse despite the fact  that a troll sat on the divan. He had a foot of grizzled beard that he'd gathered at the point of his chin with a little green rubber band, and a full head of hair that shagged down to his shoulders in filthy strings. Standing he couldn't have been more than five-foot-one or two and had to weight at least two-sixty. His baggy brown trousers were shiny at the back side and held up with suspenders. He wore a blue short-sleeved shirt and a red bow tie. Balanced on his knees was a brown cigar box that he secured in place with his two clammy paws. His fingernails were long, with a black half-moon at each fingertip.

"It's my mother-in-law," he said."She runs the trailer park where I live, so I can't get away from her. She tells my wife stuff and makes her all crazy like."

"Like yesterday," said Dutton. "I sent her up to tell her mother that we still didn't have the lot rent." Dutton squirmed in his chair and visibly gritted his teeth. "And she come back saying like I should get a job, and take a bath, and clean up the junk around the trailer."

"Well," he said and leaned forward, making his voice a coarse whisper, "I was going to do the bitch myself, but then I read about the hatchet number you laid on that cop, and I knew right off you were the man for the job."

Dutton closed an eye and made one vertical nod of his head. "Yes, and I want you to not kill my mother-in-law the same way you didn't kill that cop."

Dutton wrenched himself from the chair and planted the cigar box amid the disordered administrative rubble that constitutes the top of my desk. He lifted the lid so that I could see inside. "There's a hundred and eighty-seven dollars in there," he bragged, "and only just some of it is food stamps."

I looked at Ron and we nodded respectfully in unison.

"So you can see, I got the wherewithal," he said. "Your gal there said that you charged fifty dollars an hour and it's only up to Fifty-Second Street where you got to go. I figured to pay you for the whole hour, even if it only takes twenty minutes or so. If you can't work her in, then I'll just get an axe on the way home and whack her when I get there."

"Well, why not?" he asked as he picked up his treasure chest and backed up to the chair.

"It's in Kentwood," I said. "The Kentwood Police have the concession on domestic murder-for-hire in the City of Kentwood. They don't allow any poaching whatsoever."

"Don't that beat all!" said Dutton, as the chair groaned under his descending weight.

"If you think about it, it makes a lot of sense," I said. "They have to conduct the investigation, and they can make sure it doesn't get out of hand."

"Well, I can see that," said Dutton as he wiped his nose with his wrist.

"Tell you what," I said. "I'll call Detective Van Huis. He's the chief of detectives, and he assigns the work out." I winked. "Has to get his cut, you know."

I picked up the telephone and started dialing.

"How much is this going to cost?" asked Dutton.

The line was ringing. "I'm sure you've got plenty," I said, "but I don't think he'll take the food stamps."