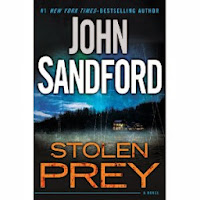 Heroes and Villains is the theme this week, and is the name of the event sponsored by Jen Forbus of Jen's Book Thoughts. Be sure to check out Jen's blog and vote in the contest this week between the ultimate hero and the ultimate villain.

As a participant in this event, you might guess I've chosen a long-time favorite as my hero: Lucas Davenport. Lucas is the protagonist in 21 novels (with at least one, possibly two more to come) and two made-for-television films. He makes brief appearances in author John Sandford's Virgil Flowers series as well.

It's difficult to know what to say about a character about whom much has already been written, and so authoritatively.  Tall, lean, dark hair, a scar slashing through one eyebrow and down to the cheekbone. A guy not afraid of the physical but whose outside-the-box thinking is his greatest job asset. A guy who loves a joke but occasionally suffers from clinical depression.  Something of a philanderer in the early books of the series, Lucas develops a happy family life in the later books, including a baby son and an adopted teen daughter. He drives a Porsche throughout the series, making him the envy of almost everyone he knows. The money for the car came from his early involvement in computer games and simulations, something he gave up early in the books also. In later books Lucas also drives a more family-oriented vehicle, some sort of SUV that I don't pay attention to. Hm, he's mean and tough and, oddly enough, a GQ devotee. I mean the man is a serious clotheshorse, with the funds to indulge his fancy.

But none of that really jumps out at you and yells, hey, you gotta read about this guy, does it? What makes Lucas Davenport a hero? Why do I nearly break into a run from the parking lot to the bookstore on those days when a Davenport book is released?

Funny, but I don't think of Lucas (Never Luke. Never.) as a hero. He's a little bit of an anti-hero early on,  a  bit Dirty Harry-ish. More than willing to take rough vengeance on a pimp who used a church key on a prostitute's face, said prostitute having been one of Lucas's informers. But Lucas has too much money, and plays politics too well to ever be just a clone of Harry Calahan. Lucas is more of an action-oriented problem solver. With, natch, some hellacious problems to solve. And as the series progresses, Lucas becomes less of a lone, street detective, and more of a team leader, driving force, idea man, and media manipulator. But always with street instincts. Watching the puzzle pieces all come together, laughing over the jokes and some of  the situations the characters face, delighting in the hunt as much as Lucas does -- these are just some of the reasons Davenport is among my favorite heroes. If, indeed, he is a hero and not just a guy who really enjoys his job. And it's not just Davenport. His entire supporting cast of recurring characters, from vice cop Del Capslock (do you love that name, or what?) to adopted daughter Letty, become welcome friends who are missed when absent.

But a hero is only ever as good as his villain, and John Sandford writes some of the best, baddest villains in crime fiction. The series kicks off with RULES OF PREY, and one of the smartest, coldest villains Lucas will ever face: maddog. The hook to the story is that the killer leaves notes at the crime scene for the police, notes that list his rules for committing murder and eluding detection: 'Never kill anyone you know.' 'Never have a motive.' And so on. Further on in the series, Lucas tries to bring down the 'Doctor Death,' Dr. Michael Bekker, a brilliant mad man. And no one who has read hit-woman Clara Rinker's story will ever forget her; she's the one criminal who is perhaps the flip side of the coin that is Lucas Davenport. I'll give Clara and the not-so-good doctor their moments in the limelight later this week.

The body count is high in these books, and there are a few readers who might find the language offensive as well as the violence. I'm afraid you can't count me among them. Author John Sandford does a superlative job of drawing the reader into Lucas's world, to the point that in BROKEN PREY, one of the standout novels in an outstanding series, Sandford got a ton of fan feedback on a list of songs Lucas was putting together for his new iPod: Best Songs of the Rock Era (suitable for a road trip). Taste in music is so subjective that not even Lucas was immune from criticism when it came to the songs he finally chose for his top 100. His final list is below. Look it over and tell me which song you think shouldn't be there? And which song isn't there, but should be? All comments on this week's posts will earn you a chance to win a copy (hardback or ebook) of the new Lucas Davenport book, STOLEN PREY, when it is released on May 15. 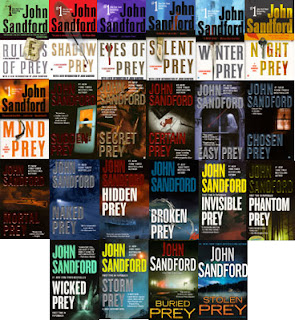