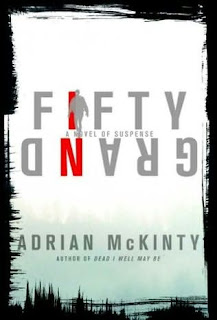 SYNOPSIS: Detective Mercado illegally enters the USA in order to find her father's killer and exact revenge. But for vengeance to equal justice, she must not only discover the truth about the killer, but also the truth about her father and about herself.

REVIEW: I read this book through twice, it was that good. If you're already a fan of McKinty's Michael Forsythe books, let me just say that I think this book is even better. The story is a strong one, with wonderful characterization told through the first person of Detective Mercado. Bolstering the plot is a pace that blisters at the opening, pulls back just slightly, pounds the reader again, pulls back, relaxes, and then HAMMERS the denouement into the reader's head. And in closing, he allows the sun to warm your bones while an almost undetectable breeze raises goose bumps. When I finished this book I felt as a giant marlin must when he's been landed by an expert fisherman.

Yeah. It's that good.

It's a rare author who can write a strong female protagonist without going over the top. Mercado is strong, but human. Bright but not brilliant. Determined but not rigid. Tender but not a fool. As a cop you might not expect her to be so naive on occasion, but even she knows that another ten years on the job and she won't even be able to recognize naivete in another. She's conflicted, as we all are if we only admit it. The secondary characters are brilliantly limned, nobody is either good or bad, black or white, to the bone. Every character has a life beyond this story.

In telling the story of Mercado's pilgrimage to the place where her father died, McKinty doesn't flinch from showing America's racism and class consciousness, but he never allows those realities to turn the focus of his story from Mercado's mission. Instead he uses the ugliness as the underpinnings that allow the story to unfold as it does. And McKinty creates a Havana, Cuba, unlike any I've read and which I suspect is far closer to reality than many of us have guessed.

The plot is relatively simple but the characters, the setting, and the tension all make it succeed and feel original. But what really sets this book apart, and above -- way, way above -- similar stories, is the prose. McKinty is a poet. Now don't freak out. McKinty doesn't go all Lord Byron or anything. His prose is sparse, even staccato at times, yet still fluid and evocative. If his words were dance they would be more tango than flamenco. None of that frilly waltzing.

Fifty Grand is worthy of launching McKinty's name onto a big old heap of award nominations this year. You can read the entire first chapter here, or here's a brief excerpt, in which the narrator has trapped a naked man in an icy lake in the Wyoming wilderness:


I offer him one of the cigarettes. He nods and I put it between his lips. It'll help him. In a couple of seconds the dissolved nicotine molecules will be firing neurotransmitters that'll release small quantities of dopamine into his brain. As the cold starts to get to him, blood will retreat from his extremities and his brain will become over oxygenated, perhaps releasing more dopamine and endophins. The feeling will not be unpleasant.

I put my hand beneath his armpit and lift him a little.

He draws on the cigarette and nods a thank-you.

Oh, companero, don't you read the poets? Irony is the revenge of slaves. Americans are not permitted to speak of irony, certainly not Americans like you.

He probably thinks I'm starting to crack, that I'll change my mind about this business.

I don't see anything.

I'm in this moment with this man.

Are you ready to speak the truth?

Or do you want to wait until the black angel joins us on the ice?

A call to prayer in the wilderness.

We Cubans are the vagabond descendants of the Muslim kingdom of Granada. We appreciate that kind of thing.

A call to prayer. Yes.

How did it come to this?