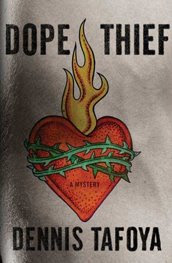 SYNOPSIS: Ray and Manny have the badges, the jackets, the guns, the drug-fueled attitudes. They have everything they need to make small-time dope dealers think they've just been raided by the DEA. When the dealers figure out otherwise, who're they going to call? The cops? But Ray and Manny have already done time and they're smart enough to know that their little string of 'raids' can't go on forever. But they aren't smart enough to quit while they're ahead. Or maybe the dope clouds their thinking, their timing. Eventually it's one raid too many, one dealer too big and with too many resources, and you can guess the kind of trouble they're facing. But Ray's got other issues. He's just turned 30, and even if he lives through the violence he's embraced, he's wondering what it's going to take to escape his addiction, his predestination, the loser life that his sadder but not wiser father told him he could never be free from. What's it going to take for Ray to not only break those shackles but also to atone for his sins, the lives he's ruined, the years he's wasted, the hearts he's broken? It looks like an impossible task, and if Ray can't kick the dope, can't make some kind of amends, then he reckons he might as well be dead anyway.

REVIEW: When literary snobs look down their noses at genre fiction, Dope Thief is the kind of book they hurriedly overlook, or else it's the kind of book they claim is the exception to the rule and then go on to point out the vast amount of poorly written crime fic while blithely ignoring the staggering output of bad 'literary' fiction. Because beyond the dark edginess of the writing and the stark depictions of life on the lowest socioeconomic scale, author Tafoya has woven a character study that stands with any literary creation I've read.

And it's not just the character of Ray. It's his pal, Manny, it's Ray's step-mom and his just-out-of-prison dad; it's the thieving, doped-up teenagers he meets; hell, it's even his step-mom's dog - the cast of characters are all so individual, so completely rounded, and so ready to tip in one direction or another and forever alter Ray's life. He's pushed one way and goes another. Thirty years old and just starting to try to figure out what being a man, what being a human means.

The author plays no games with the construction of the story. It's told simply, in third person singular. There are a few well-placed flashbacks to help fill in Ray's backstory. The transitions are clean. The prose never gets flighty or purple, it suits Ray's story. And something not often seen in debut novels, there are smaller story arcs under the overreaching arch of Ray's struggle. The story is well-paced, with dread and tension building just before the raids and then the explosions of violence, then the adrenaline ebbs but the story remains compelling as Ray just tries to deal with the consequences of what he's done and what's happening in the lives of those he loves.

While books like Beat the Reaper may be getting all the buzz, Dope Thief is a book that truly deserves a wide audience. Few writers turn out a book this good on their fourth, fifth or sixth tries; this is a debut novel. I can't imagine how much better Tafoya is going to get, but I'm looking forward to finding out.

You know I love to provide excerpts. I had a lot of trouble settling on just one scene from this book. Here, Ray and Manny have met to discuss whether to use a guy named Rick on their next job. They digress a little, and Ray mentions Manny's gambling problem, and the conversation rolls from there:


"Great, then. She can dole out the money, get the rent paid and keep you from getting your legs broken by Dickie Legrossa when the Sixers tank. What you owe him now, about twenty grand?"

Manny pulled a medal from inside his shirt and kissed it. "And I got Saint Bernadine on my side."

Ray said, "You and Arnold Rothstein." He squinted through the smoke from Manny's cigarette. "You're the one asked me to dole out the money. Hey, though, you got to love that there's a patron saint for gambling degenerates."

Manny waved his arm expansively. "There's a saint for every fucking thing. My ex-wife's cousin, Deborah?"

"She says there's a patron saint for meth cookers."

Ray held a palm up as if to stop the flow of bullshit. "Get the fuck out."

Manny held his hand across his chest, cigarette out. "I swear to Christ. Saint Cosmas she says. He's like the patron saint of people who work with chemicals. She was dating that guy, you know the one. Jacques or Jocko or some shit."

"When she moves in and finds out he's dealing, she goes to the priest and asks what does she do. You can imagine that conversation."

"No. But the priest comes up with Saint Cosmas. And of course that she should dime Jocko."

Manny gave a half-shrug. "Of course, the asshole is also beating her and the kid, so..."

"Well, wherever he is, I'm sure Saint Cosmas is looking out for him."

They stood in the lot for a minute. Ray watched tiny waves cross a coffee-colored puddle. "So...the Rick question."

"You really think the cops would get onto us and try to put a guy inside?"

"What are we, the Dillinger gang? I think we run into trouble, it ain't going to be that kind. I don't see nobody calling the cops."

They both thought about that. You could only do this shit so long. Someone was going to recognize them, or follow them, or just do something brainless when they came in the door. They wore the cop jackets and badges and they moved with purpose and told themselves they were smart, but there was only so much luck and then it was gone. At the end of the day they were as doomed as the goofy bastards they were ripping off. Manny and Ray would do lines in the truck before they went in, getting their edges sharp, making their minds fast. It couldn't go on forever. Everyone was high. Everyone was stupid. Everyone had guns.