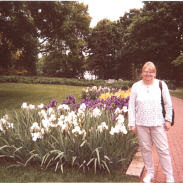 I'm a bit late to the party but allow me to boast that hometown writer Naomi Johnson (I stole your pic from Crimespace, Naomi. Hope you don't object.) has garnered a Spinetingler nomination for 'Best Short Story on the Web' for her nasty little take on police interrogation, Sisters Under the Skin. You can see all the nominees with links to their stories here. You can read Naomi's story here. And you can vote here. Please note the scroll bar on the voting page, you'll need it to vote in this category. You have until April 30 to cast your vote.

What with one thing and another March has been a difficult month. I'll try not to take it out on the authors.

The Devil in the White City: Murder, Magic, and Madness at the Fair That Changed America by Eric Larson. Larson chronicles in detail the construction of the 1893 Chicago World's Fair, a far more interesting topic than I ever would have guessed, and intersperses with it the story of H.H. Holmes, the first recorded capture of a serial killer in the USA. As interesting as the Holmes case is, and it is fascinating, I became even more mesmerized by the characters who made the pipe dream of a world's fair come to fruition. 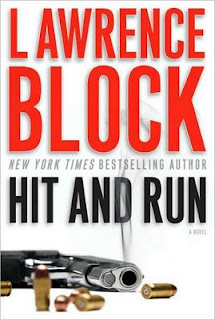 Hit and Run by Lawrence Block. Since Block has announced his retirement it appears that this is the last we'll ever hear from hitman and determined stamp collector John Paul Keller. What a freakin' pity. When the hitman himself is framed for a political assassination, who can he turn to for help? You guessed it, nobody. Can he go after the people who set him up? Not if he doesn't know who they are. Not if it means showing his face, the face that's been plastered all over CNN and USA Today. How far and fast can Keller run with less than $200 in his pocket? And why will I fall down laughing if I ever see a Homer Simpson ball cap? 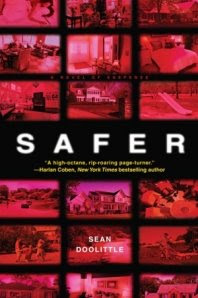 Safer by Sean Doolittle. A move from the east coast to a Midwestern suburb sets a chain of events in motion that will forever change English professor Paul Callaway. On their first night in their beautiful new home, Paul's wife is assaulted. Then comes Paul's arrest for child pornography, and accusations from a neighborhood teenager, a nice girl really, who had worked for him. And from then on, believe me, Paul's problems are only just beginning. Author Doolittle ratchets up the tension gradually until you think your head will explode. And of course, someone's does. 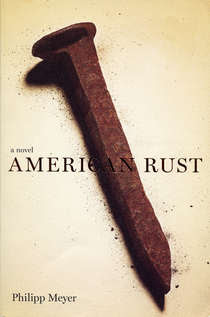 American Rust by Philipp Meyer. Possibly more mainstream novel than crime fiction, but don't let that deter any crime fic aficionados. There's enough crime to make it worth your while, but even if there wasn't, the story's structure is so solid, the characters so thoroughly understood and beautifully conveyed, that one can only wonder how Meyer can follow up this debut novel without facing overwhelming expectations. The story is about two young men, boys really, who because of an act of violence must face trials and decisions that would leave -- did leave -- experienced adults crying for help. Dramatic and wrenching. Have some lighter reading nearby, because an occasional break from the intensity is necessary. 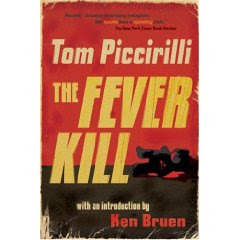 The Fever Kill by Tom Piccirilli. NYC undercover narc Creasey is in it up to his eyeballs. His love for his job (and its illegal perks) are ruining his marriage, his son hates him, he's got his mobster boss's mistress pregnant. What else can go wrong? Why not pick this time to have an early midlife crisis and go haring off to the small Vermont town where he grew up? Where his father shot and killed a little girl, where the chief of police once ran Creasey out of town, where the foundation for all his woes was first poured. This book gets slapped with the 'neo-noir' label a lot, but that's a rather shallow assessment. As with Jim Thompson's and Dave Zeltserman's books, there's more going on here than shows up in a simple synopsis. 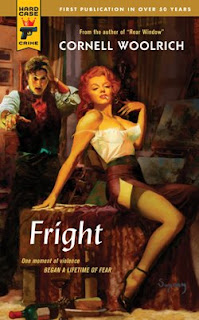 Fright by Cornell Woolrich. This book was just agony to read. A good kind of agony, the kind a master of suspense creates by stringing the reader along, letting one see only a glimpse of what is to come and dreading it all the while. The building suspense and dementia, with a crashing denouement, just kept me twisting and wincing throughout -- again, in a good way. Set around 1915, it's a simple story about a fairly nice, if somewhat ambitious, young man's descent into murder and alcoholism after being blackmailed. What isn't simple is the way Woolrich digs into the paranoia and obsession that develops in his main character. Charles Ardai, the publisher, says that this book was lost for 50 years and had never before been published under Woolrich's own name. That can only be the reason why Hitchcock never made this into a film.

The Renegades by T. Jefferson Parker. Not as much fun as it's predecessor, LA Outlaws, because that book has a charismatic character in Allison Murietta. Now the burden of the story rests on Deputy Charlie Hood, and Charlie just ain't that fascinating. The best thing about this book is that it holds out the promise of Allison's son, Bradley, being just as smart, as devious, and as charismatic as she, in the next book (if there is to be one).

Lullaby Town by Robert Crais. Okay, so I've read this book before, and it's Robert Crais writing about Elvis Cole, so what's not to like? But this time around I listened to the audiobook, narrated by William Roberts. Roberts is a way better narrator than the helium-throated Patrick Lawlor, but the producers still haven't found the reader that, for me, evokes Elvis Cole and his L.A.

Brother by James Fredericks. I'll refer you to the full review at Jen's Book Thoughts for a synopsis and an unequivocally positive take on this book. My take is that the author has great potential, his prose flows nicely and I like the way he constructed the story. The only problem I had was that -- and this was mostly in the first third of the book -- there were some moments that my disbelief came crashing to earth. But if you can suck it up and move on, the story takes over and commands your attention. I would recommend this book to fans of Grisham and John Hart. Fredericks may not be quite in their league yet, but he hasn't very far to travel as a writer.

AND I HAVE SERIOUS QUALMS ABOUT:

Even by Andrew Grant. British Naval Intelligence officer Trevellyan is framed for murder and disavowed. I was pretty excited to read this book (which will be released in May) because I had learned that the author is Lee Child's brother. And if you look at the amazon.com page for this book you'll see that relationship has resulted in a plethora of kind blurbs from bestselling authors and even a starred review from PW. I take it all to mean that everyone feels they have to be nice to Lee Child, of whose books I am a fan, because the truth is that this book is bad. The writing is nothing out of the ordinary, the characters are so flat I could weep, the setting is Anywhere Generic, Planet Earth, and the plot is a thin excuse for a few action scenes that have no whiff of credibility.

Tempest Rider by Saundra Crum Akers. Okay, I may have qualms about this book but I do think it's better, or at least has the potential to be better than Andrew Grant's Even. Tempest Rider is self-published, so don't you always lower your expectations upon learning that? The thing is, the author really has a very good story going on here and some interesting characters. What's needed is a strong guiding hand by an editor. The story involves the coming together in a small Ohio town of a gentle teacher who has fled his abusive wife and a woman who can never outrun her own past of being molested by her uncle. The pair develop a platonic friendship but someone thinks there's more going on and sets out to break them up. From there the story spirals into a series of events that edge ever closer to fatal violence. The scenes involving the abusive wife, Darla, are just riveting, even when she's doing nothing more interesting than talking on the phone. The way her mind works is wonderfully repellent. A little less exposition, some work on the dialogue so that all the characters don't speak with the same mannerisms, some shuffling back and forth of scenes to improve pace and tension, and this book could be a real winner.
at 6:58 PM