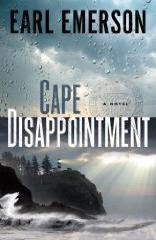 SYNOPSIS: A plane crash takes the lives of 11 people, including a US Senator and Kathy, the wife PI Thomas Black. Weeks later a bomb explodes in a gymnasium, taking four lives and nearly taking Black's life. Severely injured, hospitalized, his mind and memories clouded by painkillers, Thomas tries to patch events together. He recalls witnessing the plane crash just off Cape Disappointment. He also recalls the Slezak twins, Elmer aka 'Snake,' and Bert. Snake is a friend and fellow PI. Bert is whole 'nother story, Bert is a guy to worry about. A repeat offender only a half step from living on the streets and who was represented in court by Kathy for violating a restraining order, Bert had also warned Thomas to keep Kathy away from Senator Sheffield in case an 'asteroid' were to strike the Senator. Bert is full of paranoia, conspiracy theories and wild hairs, and he also has a mobile home stockpiled with more guns and ammunition than the Alamo. But if Bert is really the simple nutcase Thomas believes him to be, why are the FBI and the NTSB interested enough to hold him after the crash? How could a social outcast like Bert have known anything was going to happen to the Senator? Was it just coincidence that Bert was on the phone to Thomas right when the bomb exploded, killing four people and putting a steel bar through Thomas' abdomen? And the reporter who was asking some interesting questions about the plane crash, was the car wreck that killed her husband another coincidence?

REVIEW: It's been about 10 years since Emerson gave readers a new installment in the Thomas Black series, and it was so worth the wait. Over the years Emerson has created some memorable characters and thrilling plots, but I will argue with anyone who thinks this is not his best book yet because it is, and not by a small margin either. I was a little wary before reading this book because so much time had passed, I wondered if the author could still capture the upbeat, wise-cracking, affable voice of his PI. No worries. Opening this book was like falling in with old friends, there was a strong comfort level. At the same time, the reader is immediately sucked into the nightmare that has become Thomas' life.

It's a rare thriller that can evoke as much emotion as Cape Disappointment does without losing the thrill aspect. The unutterable grief Thomas Black endures is one that nearly everyone can identify with. Who has lost a loved one who has not also seen that person in parks, in cars, in stores for days, weeks even, after their death? We dream of them still being alive, we see signs around us that tell us they are trying to connect with the living. Most of us catch our breath, bear down on the pain, and go on. Thomas has a more difficult time than many because he has no body to bury – not all of the crash victims were recovered, although some bodies had washed ashore – and they were in the middle of a phone call when the plane went down. So when he sees Kathy anywhere he runs after her, but it's never Kathy. It's usually someone who doesn't even really look like her. Over and over, until the hinges on his mind start to work loose and he swears he won't run after people again. But he always does. His own personal Cape Disappointment awaits him every time. Emerson not only captures the early stages of grief perfectly, he also captures the actions and speech of those who are not grieving but must deal with the stricken Thomas. Those people run the gamut from the caring friend who simply watches over him (even Thomas realizes he's approaching a suicidal state of mind) to the attractive redhead who callously offers to come by and help clean out his wife's closet.

One of the wonderful things that has happened since Emerson last wrote about his PI is that his writing has been truly tested, grown and stretched. For this book the author has returned to the first-person singular POV so common to detective stories but that narrow POV doesn't feel like a restriction here, possibly because Emerson has learned so well how to seamlessly move the story back and forth in time. And because he has such an ear for conversation that his dialogue almost carries inflection. He could teach a master class on how to accomplish chronological and scene transitions without confusing the reader or slowing the pace while always moving the story forward. The tale moves back and forth from Thomas in and out of the hospital after the bombing to scenes before and after Kathy's death. With each change clues to the bombing or to the plane crash are provided, but also we get insight to the relationship between Thomas and his wife, between his wife and her clients and co-workers. Their marriage was not a perfect relationship but a longstanding one of depth and true friendship, and along the way we start to grieve with Thomas.

No thriller would be that without unexpected plot twists and Emerson provides some dandies, but never does he pull a James Patterson-like faux-frantic chapter ending just to leave the reader dangling. Every twist, every complication, has a raison d'etre, which gets really scary when social misfit Bert Slezak starts spouting conspiracy theories tightly connected with reality. When Thomas makes a CIA connection between Bert and the head of the NTSB, when he starts to think someone is poisoning him, and when Kathy's cellphone – the one at the bottom of the ocean – calls his cellphone, the puzzle isn't even close to being solved. Along the way Thomas is forced to face realities he never thought could exist and carry secrets that will forever haunt him.

Cape Disappointment was anything but disappointing. Characterization, pace, tight plotting, complex structure, and strong, muscular prose all combine in a winner of a book. It's absolutely, far and away, the best thriller I've read in ages. Welcome back, Thomas Black!

You shouldn't think that because Thomas is a recent widower that there is no humor in this book. Emerson always makes me laugh, and here's a sample that tickled my funny bone. In this scene Thomas is working in his cubicle and he overhears Kathy questioning the flaky Bert about the charges against him for violating a restraining order against his ex-wife:

"Her boyfriend showed up."

"He was supposed to be at work. He works the night shift down at Nucor Steel in West Seattle. You think somebody tipped him off? Maybe the government? I've been seeing more undercover federal agents in town. Did I tell you that? I'm being followed by government agents. I ditched one this morning on the way here." Bert's paranoia showed up in almost every conversation, though it was usually under some degree of control by the time he headed to court, as if the sweat factor snapped him out of it.

"Okay. What can you tell me about the car?"

"They can't prove a thing."

"They have a witness who ID'd you. And it is quite a coincidence that the boyfriend throws you out of the house and three hours later his car burns down to the rims."

"Coincidences happen all the time."

"We drew Anderson and she's tough on domestic cases. It would help if you could show some remorse in court."

"Sure. I can fake remorse."

"Genuine remorse would be better."

"No problem. I can fake that, too." He must have made a comical face, which he was prone to, because Kathy laughed.

"You're laughing. They say that's the key to a woman's heart. Make her laugh. Check out how many comedians have married beautiful women. What do you say? Costa Rica? Just you and me and a thatched roof under the stars. We could be there in two days. We'd never have another care in this world. I would read Emily Dickinson out loud and massage your feet after long walks on the beach. Haven't you ever wanted to have a man who made you laugh, worshipped your every move, and knew how to skin a rabbit?"

"The man I have makes me laugh and worships my every move, and what's more I believe he's sitting outside that door."

"Probably not, but I wouldn't be surprised if he was about to tan your hide."