REVIEW: THE VIRGIN OF SMALL PLAINS by Nancy Pickard 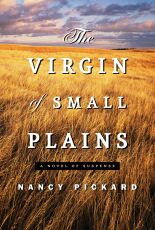 SYNOPSIS: In 1987 rural Kansas, a man and his two sons discover the frozen, naked, and bloody body of a beautiful young woman on their farm. That same night another young man, Mitch Newquist, the pride of Small Plains, is forced to suddenly leave his home and family and the love of his life. In 2004, the unidentified young woman's -- the Virgin's -- grave has become a sacred site for those who need divine intervention. But although the Virgin's gravestone has no name on it, there are several people who know who she was. The lies that are told and re-told to hide her identity, the horrific actions taken to maintain the secret will all forever change the people involved, and their children.

REVIEW: I'm leery when I read reviews of a crime fiction novel that include the attribute 'literary.' It's not that I think crime fiction is not or cannot be literary. Au contraire, mes amis. But I have often found that when critics feel the need to point out, relentlessly, the literary quality of a crime fiction tale then I can generally smell some pretty good prose and a weak theme disguising the stench of a story gone bad. So here's Nancy Pickard's The Virgin of Small Plains. Nominated for every crime fiction award going, or nearly; won half of them; and I keep hearing 'literary.'

Okay, I'm a skeptic but at least I will admit when I'm wrong. This is a literary crime fiction novel, and I mean that in the very best sense. No snarking about.

Told in simple prose (sorry, one needn't be as evocative as Benjamin Black or as elegiac as James Lee Burke to have a literary style), this is a story less about a murder than about the many lies people tell each other and themselves; a story about the loss of innocence; a story about how the past tinges the present, always. Weaving back and forth in time, across 17 years from the time of the murder to the present day, this book is a murder mystery, a romance, and a cautionary tale about the damage families do to themselves, sometimes through love and sometimes through the lack of same. And hey, author Pickard also manages to elegantly arrange a few words on faith and hope and their places in our lives. She does this in a writing voice that is without affectation, no 'look at me, I'm writing literature!' interjections.

Even though the prose is simple, don't be fooled. The construction of this story is anything but simple. There are at least six different characters sharing their own perspectives on the events, while moving from 1987 to present day, and back again. There are no phony cliffhanger chapter endings, and that allows the movement in time to feel less obstructive, less confusing, so that the flow of the narrative is barely interrupted by the time shift. Further, the author was wonderfully deft at allowing the reader to draw his/her own conclusions about the aspects of divine intervention. This is a story in which, based on you, the reader, the hand of God is either everywhere or nowhere.

The characters are perhaps more limned than finely drawn. That doesn't mean you don't get to know them through and through by their words and deeds, by who they trust and who they lie to, and why. I don't need to know what a character wants for breakfast or what clothes they sleep in. I need to know what moves them to passion, to anger, to revenge, to redemption. This I found in abundance. And the balance between the story being character driven or plot driven is a fine one. More things happen than just people telling lies: There is a tornado, a second murder, stolen birds, and sex for those would have it. The pacing never gallops but never limps either; the speed of events is perfect for this story.

If you are looking for a thriller to read, go elsewhere, unless you are thrilled by solid story, flawed but sympathetic characters, and writing without ruffles. If you want a story about real lives being turned inside out and shaken sideways by a small-town murder, then this is the book for you.
at 8:45 AM