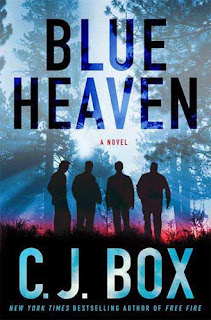 Short synopsis: In North Idaho, two children witness a murder in the woods and unable to return home, must run for their lives from four determined killers.

Okay, when you've just read a series of books that include the likes of Richard Price, Dashiell Hammett, Craig Johnson, and Craig McDonald, you have to know that at some point a book is going to come along to take you down off that kind of cloud-nine reading. I was a little surprised that the book to do it was Blue Heaven by C.J. Box.

I am unfamiliar with Box's Joe Pickett series but Blue Heaven came with glowing recommendations from those friends of mine who've read it. And it's not a bad book. Even allowing for the fact that the authors named above are a formidable bunch, I was fully prepared to enjoy a standard thriller. And the opening of the book hooked me right off. Child jeopardy? It's one of the great hooks in both printed and film thrillers, right? Especially when the children are deftly portrayed, as Box has done. The characterization throughout the rest of the story was much weaker. Box made an effort to make his hero three-dimensional, a flawed man of character except that really his only flaw was that he was a genuinely nice guy. The villains though are pure Saturday-morning-serial bad guys. I kept waiting for Singer, the head baddie, to twirl a mustache and laugh like Oil-Can Harry, maybe threaten to tie the children to the railroad tracks, and then...and then...and then...

And then along comes Jess, the Hero.

It was just about that pat. One lesson I've learned over the years by reading the best and the worst of writers like Sandford and Child, et al, is that one really fine, super scary villain is better for the story than half a dozen gee-he's-mean bad guys.

The prose is workmanlike, Box may never wax lyrical like James Lee Burke but to his credit there isn't any of the purple prose that has crept into Michael Connelly's recent books either. And with a child jeopardy tale that would have been all too easy to do. But Box never chose a word that made me step back and go, 'now really!' And the pacing was fine, the action clipped along nicely. The story never dragged, and conversely never felt artificially spurred on either. The story is seen from the viewpoints of several characters and sometimes that can drag a story down but not in this case. The changing of viewpoints actually allows for a faster pace. The setting was interesting and was integral to the story but while I liked the descriptions of the countryside and town, the characters' engagement with the place was something more talked about by the author than displayed by the characters, with the hero being the lone exception.

I will probably read more by this author but with tempered expectations. I believe that the things I did not like about this book may not be a problem in the Pickett series, as a series allows for deeper character development of the main characters and also for deeper development of a sense of place.
at 10:57 AM