REVIEW: VERY COLD FOR MAY by William P. McGivern Willie Garvin, he of knife-throwing fame, called it 'the flux' in one of Peter O'Donnell's terrific Modesty Blaise books. Willie was talking about coincidences that shouldn't happen, and the example he gives goes something like: Two books are published about the life of the 3rd underbutler for Queen Victoria. One book about such an obscure individual would be rare, but two? And published at the same time? Willie puts it down to 'the flux.' Something magnetic, he reckons. 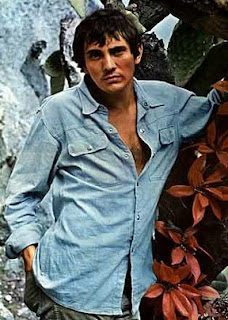 Well, Willie, (that's Terence Stamp as Willie in the wretched Modesty Blaise film) here's another case of it. This past Tuesday I set my DVR to record a couple of movies (TCM is one of America's greatest cultural assets) I had never seen: Cops and Robbers and Odds Against Tomorrow. Went out to run some errands and of course (of course!) I dropped by the used bookstore. I was looking for something by James M. Cain and was happy to get a copy of 'Mildred Pierce.' I also picked up a paperback, 'Very Cold For May,' by William P. McGivern. Never heard of the guy, but the book sounded interesting and I love the 1940s-50s hardboiled stuff and I thought this might be one.

So yesterday, I sit down to watch my movies and whaddaya know? Guess who wrote the novel that was the basis for the noir 'Odds Against Tomorrow?' Yeah, this McGivern dude. So okay, now I have to research the guy a little more. Turns out he wrote more than 20 novels, mostly crime fiction, and three of his books became films, including 'The Big Heat' (starred Glenn Ford) which won an Edgar for Best Motion Picture. So there's another movie I need to see. And the John Wayne film, 'Brannigan,' which I saw more years ago than I like to remember. And McGivern also wrote a big ol' heap of scripts for TV: Kojak; Banyon; O'Hara, US Treasury; Adam-12; Ben Casey; Slattery's People; the list just goes on and on. So before I even open the book I know the guy has some serious credentials. Didn't one of my favorite, maybe my very favorite, crime fiction writers start off writing for TV? You know who I mean. Robert Crais.

Now down to business:

SYNOPSIS: May Laval is going to publish her memoirs. And a book from May will get everyone's attention because May not only knows everybody, she also knows where they buried the bodies, figuratively speaking. Captains of industry to US Senators, mafia dons to soap opera writers, she knows all their dirty little secrets and kept a pretty swell diary just so she wouldn't forget any of the details. One of her acquaintance, a steel baron named Riordan, has not only May to deal with, but a Congressional investigation into his business practices. If he's found guilty of profiteering during the recent war (you know, WW2), he'll be ruined. To handle both matters Riordan hires a PR man named Jake Harrison to start spinning things his way. Jake is just the man for it. Not only is he a friend of May's, a real friend, he's also completely indifferent to his client's guilt or innocence. It's business, after all, and Jake is very, very good at this PR game. Jake's only problem is trying to figure out why his wife left him. Oh, and who killed May?

REVIEW: Well, put simply, if you like the crime fiction of the 1950's you'll like this book. If you don't, you probably won't. This is not one of today's mass-produced mass-murder, paint the town with gore stories. McGivern is both clever and erudite enough to give Dash Hammett a run for his money. Seriously. Shove over, Nick and Nora Charles, because Jake and ex, Sheila, spout dialogue that is witty, urbane, and often cuts to the bone. The story, given its confinement to about 200 pages or so, is nicely twisty and I did NOT guess the killer. Hurrah! So I went back to the bookstore and got the other two McGivern titles.


Jake smiled pensively. "Why you left me I'll never know. We always had fun, didn't we?"

"Yes, but you drank too much," Sheila said. "Also you pulled too many deals like tonight."

"Not at all," Sheila smiled. "I wanted to be a wife, but you wanted a drinking companion."

"Good God," Jake said. "You sound like some creature who's just been dragged to civilization from darkest suburbia."

"Also, I never got adjusted to your working for a fraud like Gary Noble," Sheila said.

"Dear, you're beginning to rave. You work for Gary, too, remember."


And one more bit, because some of this is just so delicious. Here on page 34, Jake visits May in her boudoir to discuss the diary. (Don't worry, this book never gets coarse. Your nine-year-old could read it. Might need a dictionary though.)

Jake sat down on a dainty three-legged chair and built two drinks. May sipped hers approvingly, and said, "Don't you like the Walden simplicity I've created up here?"

Glancing around, Jake grinned. The high-ceilinged bedroom faced east, but thick pink drapes were pulled together now shutting off the view of the park and the lake. White fur rugs were scattered about the polished floor, and the immense four-poster bed, covered with fat pink pillows, stood imposingly in the middle of the room. The light was soft, and there was a fireplace and bookshelves. May's dressing table was impressive as a tribal altar, with its flesh-toned mirrors, and the banks of crystal jars that contained hand lotions, cold creams, powders and colognes.

"You need a couple of blackamoors with ostrich fans," Jake said. "Outside of that you didn't miss a trick."