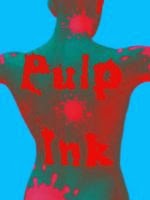 Okay, full disclosure: I have a story in the PULP INK anthology. Presumably this creates a conflict of interest in any attempt on my part to review it. Well, hah! I say, and hah, again! (I'd say something stronger, but I save those words for my stories and close friends. And politicians.)

Sure, this means I'm not likely to say bad things about the anthology. But it doesn't necessarily follow that the good things I'm about to say regarding PULP INK are thereby false. In fact, you can strap me to a lie detector and test my veracity: There are some exceptionally fine stories in this collection. Were that not the case, I would go to some lengths to pretend I had no part in this whole scheme, instead of parading the fact that I got a story placed in the same book as -- ahem! -- Allan Guthrie. As Reed Farrel Coleman. As Hilary Davidson. As Gary Phillips. Not to mention a host of other excellent writers whose names are not (yet) so well-known.

I'm not going to beat you over the head with details on each and every story. There are 24 of them, for crying out loud, and I can't sit here holding your hand all day long. So these are my very most ultra-favorites in this collection. Each of them alone, I promise you, is worth the $2.99 USD price of admission:


And if you go so far as to read all of those, you might as well spend a couple of minutes and read my story, too. Triple-dog dare ya!