Would you want his job?

Even in the world of crime writers, it isn't often that one gets to meet and interact with someone like Dr. Jeffrey Smalldon, but about two dozen people, including yours truly, had that rare pleasure today.

Dr. Smalldon is a forensic psychologist, in private practice since 1990. He is the son of a career FBI agent, so he grew up with criminal behavior as a frequent topic of conversation around the house. He has provided consultation in more than 150 capital murder cases. If you keep up with this kind of thing, and you're an Ohioan, you might recognize the names of Jerry Hessler, Jeffrey Lundgren, Thomas Lee Dillon, Alva Campbell, and more recently (like, say, yesterday) James Mammone III. All of them are cases on which Dr. Smalldon has consulted. I suspect he would have been called to consult on Anthony Sowell's case, but Sowell has changed his plea from 'not guilty by reason of insanity' to a simple 'not guilty.'

Besides the influence of his father's career, Dr. Smalldon stated that his interest in forensic psychology dates back to 1982, when two women he worked with at (then) Riverside Methodist Hospital (Columbus, Ohio) were brutally -- and that may be a colorless adjective in this case -- murdered on the job, just after Christmas. No arrest was ever made in that case. It is, however, interesting to note that the husband of one of the victims was William Matix. If you're old enough to remember the famous 1986 shoot-out in Miami between FBI agents and two bankrobbers, then you may also remember that Michael Gross played the role of Matix in the made-for-tv movie, In the Line of Duty: The F.B.I. Murders.

As a supervisor of the murdered women, Dr. Smalldon had met Matix after the murders, to express his condolences, and today he described the Matix he met as being soft-spoken, articulate, and an active church-goer.

Well, you can see how such events, and the conflict between apparent personality and opposing behavior, would naturally lead Smalldon to a life-long interest in forensic psychology. But the interest was there even before the terrible events at the hospital. In the 1970s, while an English major in Indiana, he corresponded with Charles Manson and many of the Manson "family" members, after reading Helter Skelter left him wondering 'why?'. Smalldon met twice with John Wayne Gacy, and has correspondence from him as well as from the Manson group, Thomas Lee Dillon, and other serial killers.

The hour we had with Dr. Smalldon, which he graciously provided pro bono, stretched into almost 90 minutes, and even then several of us cornered him to talk further. My suggestion to him was, "You have to write a book." And clearly the idea appeals to him, but he said that his work now keeps him far too busy to tackle such a task.

Knowing how curious his audience would be, the good doctor provided us with some fascinating, albeit chilling, handouts, and my set is even now sitting right next to my keyboard. With his permission to do so, I'm providing you a scan of one of the notes he received from one of America's most infamous serial killers. See if you recognize him. Enjoy. 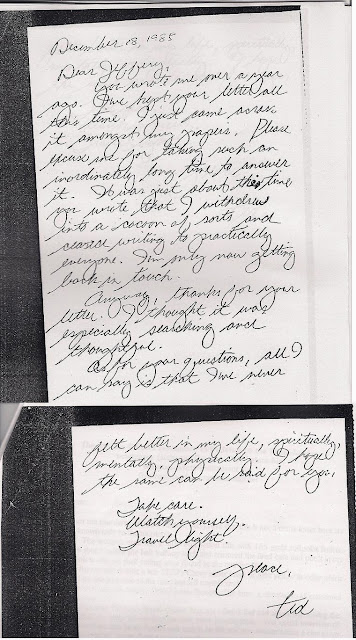