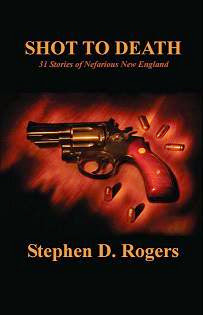 A part of the joy in reading short stories is that they are, well, short. Brevity is not only the soul of wit, as Shakespeare noted, it is attractive in its own write, er, right. A bite or two of a truly tasty short story is often more satisfying than a five-course meal of been-there-read-that novel.

There's a high percentage of tasty morsels to be found in Stephen D. Rogers' SHOT TO DEATH, an anthology of crime fiction tied together by locale. My closest brush with New England was in the form of watching reruns of Murder, She Wrote, so I was expecting lots of laconic New Englanders in these stories. Lots of "ayehs" and lobster fisherman. Rustic atmostphere. Colonial past looming over the present.

I'm delighted to report that my expectations missed the mark by a significant margin. I don't think there's a single "ayeh" in the book. The stories may occur in New England, but these are stories about people more than place. Take Raising the Bar, in which the mother of a toddler is agonizing over the damage done to her son's face, quite by accident, but for which maternal guilt is reshaping her every thought. Her angst is building into action, and Rogers wisely stops short of giving the reader the details. This story could be happening to any mother in the world, not just a New England mother. The same is true of Breakdown, in which a father who harmed his little girl no longer trusts himself to be around her and takes himself out of her life. From the act of inadvertently, but not accidentally, harming his child springs all his future decisions, major and minor, right down to whether or not he wants fries with his order.

A nice change-up from these noirish parents and ominously unresolved endings, is The Big Store, an amusing tale of three none-too-bright con artists who plan their scam in a diner, using their outdoors voices. The conversation between these three geniuses reminds me of the kind of nonsensical discussions carried on by the patrons of the OJ Bar & Grill in Donald Westlake's Dortmunder series. Another story on the lighter side, and one of my favorites, is Custody Battle at Red Creek. What that title may imply and what the story proves to be about -- vastly different. It's a cat-and-mouse tale about two competing private investigators who can't stand each other and their methods of expressing that mutual hatred.

To be sure, out of 31 stories, not every one is a winner. For example, the ending of High Noon, about a bankrobber left behind, lacks the punch and polish of C.O.D. about a sleep-deprived homeowner who takes matters into his own hands when law enforcement officials refuse to do anything about the repeated vandalism of his mail box. But the majority of these stories are worth your time.

How much time? Well, in general these are very short stories, clocking in at an average of roughly 2,000 words per. So depending on how fast you read, that's maybe 5-10 minutes per story. What's remarkable is that stories so brief usually have to focus on situation while character often gets understated, but there are a number of stories here in which character dominates. This is when Rogers is at his best.

Disclosure notice: A copy of this book was provided by the author at no charge to me. I make no money from reviewing this book, nor gain anything more. Do we really have to go through this every time I read a book?