Look at that face. Just look at him. A wise, kindly old gent, wouldn't you say? A beloved granddad's face, a grandpa who takes you fishing and buys you your first pocketknife and teaches you to whittle. A grandpa who never loses patience while you search for the correct wrench to help him fix the kitchen plumbing. A grandpa who seems no older than you as the pair of you sneak into the kitchen to steal cookies cooling on the rack.

Well, maybe that man in the photo is all of those things, I don't know, but that's not what I think of when I look at his picture. I think of a cold criminal named Parker who was killing a man in his garage when the phone rang. I think of an ex-airman named Ray who was a passenger in the car his father was driving when someone shot and killed his father. I think of dopey Fred Fitch, who never met a scam he didn't fall for. And I think of John Dortmunder & company, the most entertaining bunch of thieves and nogoodniks in print.

The man in the picture is, of course, Donald E. Westlake. If you haven't read any of his books, allow me to expound on the quality and quantity of his work. First off, he's won three Edgars in three different categories (the only other person to do that is Joe Gores): Best Novel, Best Short Story, Best Motion Screenplay, and he's been named a Grand Master by the MWA. More than a dozen films have been based on his books: The Hot Rock, Point Blank, What's the Worst That Could Happen, A Slight Case of Murder, and more. More? Hey, one of his books, Jimmy the Kid, was made into films in three countries: Italy, Germany, and the USA. Westlake has also written numerous original screenplays (e.g., The Stepfather) and his screenplay for The Grifters, based on the classic crime novel by Jim Thompson, won him that Edgar. Under one name or another (more than eight, I think, but who can keep track?) Westlake has authored more than 100 novels, and is still going strong.

That's good news for his fans. I count myself among them, but I'm really a neophyte. It's only been two or three years since I first read one of his books. I'm perhaps a quarter of the way through his oeuvre, and let me just say that in those 25 or so books Westlake has never once disappointed me. He is equally adept at creating comic crime capers or taut, edgy, brutal crime fic, a la the Parker books, written under his Richard Stark pseudonym.

I consider comic crime fiction extremely difficult to write. As proof, I offer you the paucity of authors who do it well. How many authors can you name beyond Elmore Leonard, Carl Hiaasen and Donald Westlake? I will admit there are some budding comic crime writers out there whose work I enjoy and admire: Troy Cook, Declan Burke, et al, and I expect more good things from them, but for consistency, longevity, originality and laugh-out-loudity nobody tops Westlake.

All of which brings me to my latest encounter with Westlake's John Dortmunder creation: Drowned Hopes (1989). This is not the latest book in the series, in fact I seem to be reading this series in no particular order at all. Doesn't matter, each Dortmunder tale is a comic gem that stands on its own. 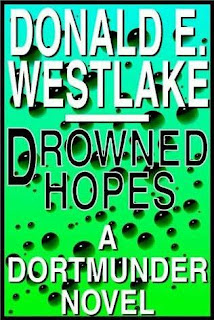 SYNOPSIS: John Dortmunder arrives home after a futile night of thieving to find that a former cellmate and completely insane killer named Tom Jimson (and can you spot the similarity to Jim Thompson and his psychopathic characters?) has taken root in his living room. Tom wants John to figure out a way to get to the $700,000 Tom stole in an armed car robbery more than twenty years earlier. Problem: the money is in a coffin buried behind a library in a town that is now under 50 feet of water. Yes, while Tom was in prison a state reservoir was created that swamped the entire town. John doesn't think he can do this job, doesn't want to do this job even for half the money, he wants nothing to do with this madman, but if he doesn't somehow find the coffin and get the money to the surface Tom will dynamite the dam and hundreds of people will be killed in the resulting flood. And even if by some miracle John manages to salvage the money, he has to worry about Tom. Tom's partners all have a way of dying violently. Now if you put this same plot in the hands of, oh, say, Marcus Sakey, you would get a pretty good thriller, a nail-biter. In Westlake's hands, this story becomes a series of hilarious mishaps, misconstructions and misdeeds that build on themselves. A plan that starts with just Tom and John grows, little by little, to include all of Dortmunder's gang of regulars as well as a computer nerd, a dive instructor, an illegitimate librarian, her foul-mouthed mother, and possibly the unluckiest bridegroom who ever lived.

PACING: Drowned Hopes builds to its denouement in a more deliberate fashion than some of the other books in this series. In my opinion, that slightly slower pace is necessary due to the construction of the book. The story is sectioned into four separate attempts by Dortmunder to retrieve the lost loot. Each section is its own tale with its own story arc and each builds on the previous section. Instead of a single story arc, the sections stair step up and up to reach Westlake's last grand joke on Dortmunder.

CHARACTERIZATION: In the Dortmunder books, character is as much a physical attribute as it is about personality. To look at these people is to instantly know their nature.


When a lawman looked at Dortmunder and Tom Jimson, particularly together, he said to himself, "Probable Cause is their middle name."


"...a round soft creature as milky white as vanilla yogurt...eagerly melting eyes, like blue-yolked soft-boiled eggs...perhaps elsewhere in the solar system he would find short, fat, moist creatures like himself..."


It is as much the interactions of the characters as it is the individual characterizations that make for reading enjoyment. For example, modern technology is anathema to Dortmunder, while the personal computer is Wally's raison d'etre. Wally lives in the gaming world, planet Zog to be exact, and although Dortmunder would like to verbally slay him for his otherworldly notions of how to retrieve the money (laser-burn off all the water? giant magnet on a spaceship?), he found "it wasn't easy to be hard-edged or sardonic when gazing down into that round guileless face."

SETTING: Westlake does not create the kind of breathable, walkable, everywhere-at-once ambiance that a Crais or a Connelly provides. Where those authors develop whole landscapes that are reflected within their characters, Westlake creates smaller, detailed exteriors that fight with his characters. Dortmunder becomes convinced the reservoir is trying to kill him but the inducements to keep him going back into the reservoir and his various escapes from the water make for some of the funniest moments in the book.

PLOT: The core idea of criminals going to great lengths to obtain property not their own is hardly new, but there's nothing cliched about Westlake's take on that idea. Of the books I've read in this series, Drowned Hopes may be the most tightly focused and the one in which he takes Dortmunder completely out of his comfort zone. When the basics of the story are fleshed out by events such as the hilarious bit-by-bit breakdown of the bridegroom or the sudden emergence of Tom's old -- and I mean old -- nemesis, the story takes (water) wings.

PROSE: Westlake provides a strong narrative flow in which digressions are always brought into play later. With so many characters and plot points, the third person, subjective POV was a wise choice. Here is an excerpt taken from chapter two, shortly after John and his companion, May, find that Tom Jimson, ruthless killer, has entered their lives:


Tom turned away, going back into the living room, walking rigid, like a man who's been broken and then put back together a little wrong, using too much Krazy Glue. Behind his stiff back, May waggled eyebrows and shoulders and fingers at Dortmunder, asking, Who is this person, why is he in my house, what's going on, when will it end? and Dortmunder shrugged ears and elbows and the corners of his mouth, answering, I don't know what's going on, I don't know if this is some kind of trouble or not, we'll just have to wait and see. Then they followed Tom into the living room.

Tom sat on the better easy chair, the one that hadn't sagged all the way to the floor, while Dortmunder and May took the sofa, sitting facing Tom with the look of a couple who've just been asked to think seriously about life insurance.


Other than advances in communication technology (Internet and cellphones specifically), this book has held up very well over the years. I recommend Westlake's Dortmunder books to everyone who likes a laugh, and I look forward to a new Dortmunder adventure next year, Get Real, when John and his friends agree to do a reality show heist. The mind boggles.
at 10:30 AM