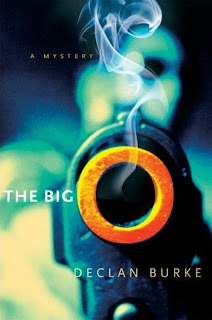 SYNOPSIS: Okay, pay attention: Karen (full-time receptionist, part-time armed robber) meets Ray (part-time painter, part-time kidnapper). Ray is planning on kidnapping Karen's best friend, Madge, who is almost divorced from Karen's boss, Frank, and Frank is kinda-sorta Ray's employer, too, but Karen's ex-boyfriend, Rossi, is out of prison and he plans on kidnapping Karen's best friend, Madge, to force Karen to give back some things that belong to him, Rossi. Got all that? Good.

REVIEW: Can you say funky? Can you say funky and Irish in the same sentence, is that legal? Is it possible? 'Course it is, you saw The Commitments, didn't you? The Big O is a fine, fun and altogether funky read. Take one part Ruthless People, add one part Fargo, mix with three parts black Irish humor, and you'll still need author Declan Burke's storytelling skills to get it all properly shook up. 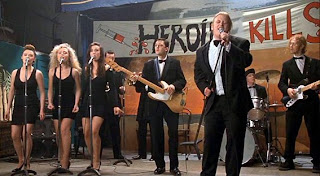 The plot, as you were smart enough to infer from the synopsis, is complex. And until you read this book, you don't know the half of it. Burke has taken the 'six degrees of separation' game, melded it to a Rubik's cube, and out of this mass of complications and coincidences, told from a dizzying number of POVs, comes a story that is actually, surprisingly easy to follow. But only to follow; you don't get to lead here. Although you'll think you're a bright reader, you being one or two thoughts ahead of the characters, don't think you'll get ahead of the author. Around every corner he's installed another corner, every bright bulb of a character can come unscrewed (there, play with that metaphor, Mr. Burke!) or just burn out. There are no clear-cut heroes yet still there are characters to like and cheer for. And a couple to spit on. And even the character most spit-worthy (say Rossi or maybe Frank) is so luckless that his life is a series of laughable predicaments.

Declan Burke has not only created this fun fest of what has been called (by better wordsmiths than I) "screwball noir," he is also the author of one of my favorite blogs, Crime Always Pays. If you read a few of his posts and find that his style and humor appeal to you, you're sure to enjoy The Big O as well.

I waited a long, let me say it again, a lonnnggggg time to get my hands on this book. I had it on order at the bookstore back before the U.S. publication date, September 22, 2008. And the book finally arrived on November 5, in spite of the distributor's malingering, and there I'm standing at the front of the store, a couple of other readers milling about, I dunnamany, and the clerk yells out, 'Hey, Corey, your book is here: The Story of O.'

Ahem. Imagine my surprise. I couldn't work up to chagrin, I was thinking that maybe people in the store would maybe reckon I'm more interesting than I am. You'ns out there would know better of course. If you want interesting check out Declan Burke and The Big O.
at 1:30 PM