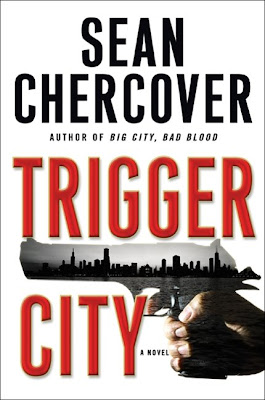 SYNOPSIS: PI Ray Dudgeon is a mess. He has not recovered, either physically or psychologically, from the torture he experienced in Big City, Bad Blood. The love of his life doesn't think he'll live so long that she wants to hang around for the funeral. He's so broke he's going to have to sell his beloved '68 Shelby. But then he gets this case, a really good paying case (he can keep the Shelby), and there should be no real work involved because the facts are all right there in the police files: Joan Richmond, manager of payroll for a department store chain, was murdered by Steven Zhang, a co-worker from the IT department. He shot her, left a written confession with her body, then he went home and called his wife, said he'd done something very bad, sat down and blew his brains out. To quote the Kevin Bacon character in A Few Good Men, "These are the facts of the case. And they are undisputed." Remember the tagline from "Absence of Malice?" Everything they said was accurate. But none of it was true. Chercover is more succinct: Facts are not truth.


REVIEW: Ray Dudgeon is a leading man to die for or to kill for, depending on whether you are a reader or an author. Ray comes from a similar mold as Elvis Cole and Lincoln Perry. Ray's blessing, or more probably his curse, is that he is more flawed than either of those two fine PIs. Don't get me wrong, he's altogether a noble guy when it comes to working the case and protecting the innocent. But Ray is almost incapable of compromise and although that may sound like a virtue, in what I consider one of the most powerful scenes in the book, Ray's journalist friend, Terry Green, communicates in no uncertain terms that that is just not the case:


Terry swallowed some more Scotch. "Don't start. I'm not in the mood."

"You ever listen to yourself? You come on with all that sanctimonious bullshit. Sure, you're better than the rest of us. You quit, I stayed. Therefore, I sold out."

"You say it all the time. You say it every time you sneer about the state of the news business. Every time you talk about how you couldn't handle the compromises, like you're admitting some personal failing, but what you're really saying is plenty clear. Let me tell you something: quitting doesn't make you morally superior. I'm still in the trenches, busting my ass. And once in a while, I get a good story out there."

I fished my smokes from a pocket and lit one. Drank some scotch. I didn't want to deal with this right now. But it had obviously been brewing awhile and now it was out in the open and I couldn't pretend he hadn't said it.

And I couldn't escape the feeling that our friendship was hanging in the balance.


And coming across to his friends as morally superior is only one of his faults, and not the worst. What Ray Dudgeon is is a fully-developed, 3D, flesh-and-blood man, one who you like but who also makes you cringe occasionally and say, 'oh, no, he didn't just do that, did he?' And I'm not talking about the standard bad-boy behavior for some fictional PIs either, like Spenser and Hawke. Uh uh. Ray's a lot more Chicago, a lot more human than that. And needs to have friends willing to get in his face, that's for sure. Remember (if you've read the books) how Spenser gave his lady love, Susan Silverman, all the space in the world when she wanted to sever their relationship? Let me just say, Ray and Spenser would have a huge difference of opinion on how to deal with the fallout.

Not every character in this book is as fully developed as Ray. Good thing or I'd still be reading it. But every character who is close to Ray, or gets close to him, is well-developed, and even some least likely to be fully-drawn are handled beautifully. For example, the murder victim, Joan Richmond. This case really is not about her, or only peripherally, and yet Ray spends a lot of time getting to know her. She had no close friends; for family, only a father whom she had never really known. Her work could hardly be described as absorbing. But Ray spends time on her, in her house, among her music and furnishings, and he gets to know her pain, her loneliness, and through Ray, so do we get to know her, and ache for her, and grieve for her.

Chercover makes a fine case in this story for how little we Americans know about our government. We were all made aware by the media that our government uses private mercenaries in Iraq. How many of us read about paramilitary corporations beyond that particular news story? We all know, or think we do, about the genocide in Darfur. How many people are aware which foreign government has supported that devastation, and why? Chercover poses the question, and it may not be theoretical, what if a corporation of American mercenaries contracted out to work for a foreign government? The dangers of even allowing such corporations to exist, let alone thrive, pose threats far beyond the occasional international incident. Where is the accountability? Who becomes complicit in the actions of that company? Our government? Us? Trigger City is a terrific book not just because the story is compelling but also because the story and its outcome are so very possible. Maybe even probable. Maybe even certain. I'll buy the booze if Chercover wants to talk about it.

You can read this book and just enjoy the story if you want; it's a dandy and it's populated with interesting characters. (I forgot to mention Gravedigger Peace, didn't I? A favorite character of mine, reminds me of someone I know.) You don't have to go any deeper into the questions posed than you want to. But you should. Not only does it make for a richer reading experience but -- listen to me -- under the guise of crime fiction, Chercover raises issues that every American should be aware of, should read about, should think hard about. Should not make snap judgements about. But the pace of this book is Usain Bolt-swift. Start to finish, this is a sprint, not a marathon, and that makes it easy to just not think hard about these issues, to just move on to the next book. So let me urge you: Don't read too fast. Seriously. Puzzle pieces go flying everywhere in any given scene, and in all the excitement it gets easy to overlook the niceties Chercover has incorporated into the story. In short, he won't always stop to explain the fine details to you. If you aren't sure what he's talking about (MK-ULTRA, for example) stop and find out. That's why we have Google and Wikipedia.

And here's why it's important that you do this: Facts are not truth.
at 9:30 PM