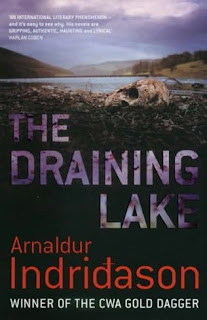 SYNOPSIS: Near Reykjavik, a skeleton is found in a lakebed, a skeleton tied to a Soviet-era "listening device." Inspector Erlandur also wants to look into the case of a man who went missing in the late 1960s, leaving behind a broken-hearted fiancee and a brand-new Ford Falcon with a missing hubcap. And for those who would ask this question first, yes, the draining lake was a real phenomenon.

REVIEW: Each time I begin an Arnaldur book (in Iceland they pretty much go by first names) I question why? The ambiance is always one of dreary bleakness, the people cold and stiff with each other. The pacing is slow and melancholic. But by the end of each of his previous books, Arnaldur had turned my head and heart completely over. And he's done it again.

Absolutely this book can be defined as a mystery. I have seen Arnaldur's stories described as macabre thrillers. That's nonsense. These are gentle mysteries, with passion at the core. Not cozies, never cozies. Nothing, especially not the characterization, is ever so neat and tidy as in a cozy. And this book, The Draining Lake, is more than a mystery. It's a love story. And as with all the best love stories, it's about loss.

Loss echoes loss throughout the book. As Erlandur investigates his two cases, the missing man and the skeleton in the lake, the author also unfolds to the reader a story in the East Germany of the Cold War era, a story of enthusiastic young socialists, of "interactive surveillance," of promising futures, of family, and of rank betrayal. The author never cheats mystery buffs by having the cases solved by 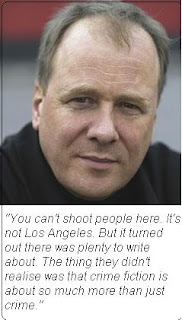 information they lack; if anything, the reader gets more information than Erlandur and his team. The denouement is wrenching because it not only furthers the theme of loss, but also demonstrates the haunting nature of love. It is through these themes that the story becomes more than an Icelandic mystery, it becomes an acknowledgment of a universal human experience.

Erlandur's character may be best defined by an event that occurred in his youth, a story given in detail in a prior book, when his brother was lost in a snowstorm and was never found. Erlandur consumes books of survivors' stories and spends his holidays in the countryside where his brother was lost. Erlandur's daughter, Eva Lind, is lost again to him, maybe forever this time as she has once more sunk into the hell that is the life of a junkie. This time Erlandur refuses to try to find and rescue her; he can't bear to bring her home again only to lose her again. That cycle of recovery and loss is more than he can bear. This leads to a scene between Erlandur and his long-estranged son, in which Erlandur's abandonment of his children when they were young depicts just how tragic that event was for Eva Lind. The scene is no less powerful for the spare prose:


'I'll try to talk to her,' Sindri said. 'But what I really think is that she's waiting for you to come and rescue her. I think she's on her last legs. She's often been bad, but I've never seen her like that before.'

'Why did she cut her hair?' Erlandur asked. 'When she was twelve.'

'Someone touched her and stroked her hair and talked dirty to her,' Sindri said.

He said this straightforwardly, as if he could search his memory for such incidents and find a whole hoard of them.


The losses keep mounting. One of Erlandur's assistants, Sigurdur Oli, a character with whom I felt no kinship in prior books, becomes deeply sympathetic as he must deal with the constant phone calls from a man who feels responsible for the death of the man's wife and child only because he asked his wife to buy strawberries on her way home. She and the child were struck by an out-of-control vehicle and the man, nameless throughout, cannot shake the burden of culpability. Sigurdur Oli takes the calls at all hours, in all places, and gives reassurance while begging the obviously suicidal man to seek professional help. The calls become progressively desperate. And then Sigurdur Oli and his beloved Bergthora experience their own loss.

All of these are modern echoes of the losses depicted in the two cases. In one instance a woman is herself lost, as she never comes to terms with the disappearance of her fiancee, her one love, never knowing what became of him or whether he might even still be alive. In the other case, a young man's love is not only stolen from him by betrayal, but his future, his family, and eventually his raison d'etre are drained from him. Loss is a slowly draining lake; Arnaldur chose an apt metaphor.

If you like sharply defined characters who will never surprise you from book to book, this may not be the story for you. You cannot read one Erlandur book and think you know him. Even Arnaldur Indridason admits he does not fully understand this character. If your taste runs to perky chick-lit, skip this book. Ditto gorey thrillers and forensic labyrinths. If, however, you enjoy the patient unravelling of knitted puzzles, if you are willing to invest your emotions in characters who may not be willing to participate in neatly-clipped endings, who may not even be thoroughly likeable; if you can get beyond the odd feel of Icelandic names to the humanity they represent, you may find it worthwhile to pick up the Erlandur books and explore the nature of loss, how it ripples across the surface of our lives, and how ignorant we often are of what happens below that surface.

Should you care to investigate more about the Erlandur books, the first one published in the USA was Jar City, which was also made into a film. Here's the trailer: