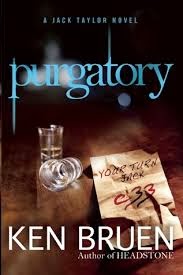 Oh, sure, I was prepared to like PURGATORY -- the book, not the concept -- from the outset. Ken Bruen? Jack Taylor? Wit and poetry and irreverence and, natch, violence? Just my cuppa.

But when Bruen introduces me to a quotation from Mark Twain, dissing Jane Austen? I went from pure reading pleasure straight on to literary paradise. No stops for purgatory -- the concept, not the book -- along the way.

Want to know what Twain said? Sure, you do. If you are as sickened as I am by the constant parade of cinematic pap for what amounts, IMHO, to little more than a collection of 19th-century soaps occasionally breathed on by the faintest breeze of humor, you want to know (if you don't already) what he said. And if you are one of the Army of Austenites, ready to take up teaspoonly cudgeons in her defense, you want to know, too, so that you might gird your loins for literary battle. So. What Twain said was:


'Any library is a good library that does not contain a volume by Jane Austen. Even if it contains no other book.'

You can't imagine my delight at reading that. Oh, Ken Bruen, how much I owe you for introducing me to that line! And knowing a bit about Twain, just enough really, it seemed likely that he had more than that to say about Austen's books. So I went looking and found, for the vindictive pleasure of we few, we happy few, we band of Anti-Austenites, this pair of nasty gems:


'I haven't any right to criticize books, and I don't do it except when I hate them. I often want to criticize Jane Austen, but her books madden me so that I can't conceal my frenzy from the reader; and therefore I have to stop every time I begin. Every time I read 'Pride and Prejudice' I want to dig her up and beat her over the skull with her own shin-bone.
-- Letter to Joseph Twichell, 13 September 1898

'To me his prose is unreadable -- like Jane Austen's. No, there is a difference. I could read his prose on salary, but not Jane's. Jane is entirely impossible. It seems a great pity that they allowed her to die a natural death.
-- Letter to W. D. Howells, 18 January 1909


No, please, don't anyone send me any impassioned defenses of Ms. Austen's creations, or of any of the works that sprang (sprung? springed? spronged?) from them. It would be quite useless. Neither of us will persuade the other. Instead I will admit here and now to being a literary heathen. And I will continue to laugh every time I read one of Mr. Twain's remarks about her work. You may consign me, not to purgatory (the place, not -- you know), but directly to perdition if you like. I shall be happy to shake Mr. Twain's hand upon my arrival there.

Which locale, one muses, may be where Jack Taylor is heading. Anyone who has read much of the series probably thinks Jack has either already been to perdition or long been doomed to eventually end there. And yet, here in PURGATORY -- the book, not the other -- Jack seems to be managing his vices and character flaws better than he ever has; backsliding a bit now and again, but not only making a recovery, but wanting to make a recovery. Wanting to avoid the violence, the drugs, the booze, the cigarettes. Jack even manages not to immediately lay verbal waste to his arch-enemy, Father Malachy, when he discovers the ill-natured padre is reading FIFTY SHADES OF GREY. No doubt Jack is saving his barbs for his final downward spiral into perdition so that he has that one last feel-good moment before eternal damnation.

No, this isn't much of a review of Ken Bruen's fine book, is it? But what I said a few paragraphs back, about wit and poetry and irreverence and violence, that all holds true. This book is trademark Bruen in that, yes, his fans will find what they expect to find in a Jack Taylor book. And PURGATORY is also trademark Bruen in that his fans will find what they least expect to find as well. This is why Bruen is still the King of Crime Fiction in my universe.