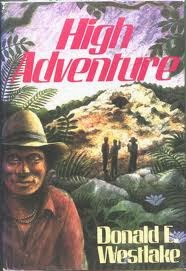 Pilot Kirby Galway is having a bad week. He has two different customers (for the Pre-Columbian artifacts he smuggles) show up at his home in Belize at the same time. That wouldn't be so bad except that each customer thinks he is the exclusive customer. They also think those artifacts are real. If that's not enough to give Kirby a headache, along comes a fiercely honest, Junoesque archaeologist named Valerie Green. Valerie ("despoliation!" is her watchword)  is positive there is an undiscovered Mayan temple right -- there. Yes, there. Right where Kirby and his band of merry Mayan pranksters have created a fake temple on his land. Government official Innocent St. Michael -- a sorely misnamed individual -- knows very well there is no temple on Kirby's land because Innocent sold him that land. Suckered him on the deal, in fact, because the land is worthless. But Innocent was never one to let a fast dollar or a beautiful woman get by him so he's very curious as to all the shuckin' and jivin' going on out Kirby's way. Vernon, Innocent's right hand man, is hell bent on bringing down the Belizean government, and that may involve kidnapping and murder if he can withstand the ulcer-inducing stress of simply imagining those events. And in between making fake antiquities, keeping his customers satisfied, drumming up new customers, staving off both the government and the rabid archaeologist as well as reporters and Guatemalan terrorists disguised as -- wait for it -- Ghurkas, Kirby still has to complete his usual rounds of smuggling marijuana into the US.

Now having said all that, do I really need to tell you what a delightful confection this book is? There is no weight to the book at all, despite Westlake's wryly humorous reflections on government corruption, academic corruption, and the general ineptitude of the human race. The story is a charming bonbon, aiming solely to amuse the reader, and it succeeds admirably, though the book does not quite rise to the levels of hilarity achieved in the author's Dortmunder series.

Westlake rounds out all of his characters, finding as much humor in their assets as in their liabilities, and he sets up scenes worthy of the finest screwball comedies in which to mentally torture his characters with their misinterpretations of situations and identities. There is one particularly funny scene in a hotel restaurant in which Kirby's various customers and the archaeologist are all trying to have dinner, trying not to be recognized, and everyone in confusion (and no small amount of fear) as to identities and motives. That the scene plays out with very little in the way of dialogue is testament to Westlake's skills of characterization and the third-person point of view.

Besides being a master of the plot twist -- Westlake's mind was positively labyrinthine -- the author also wrote fine prose, full of imagery, often beautiful yet lacking any pretention. For readers familiar only with his Parker novels and their lean style of prose, this book is a real change of pace. Fans of Westlake's Dortmunder series will find much to enjoy here, but will still miss the crazy gang in that series. 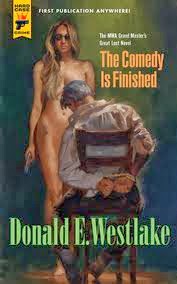 On Tuesday, Feb. 21, Hard Case Crime will release THE COMEDY IS FINISHED, probably the last we will see of Westlake's previously unpublished works.
at 7:34 PM