"...something scary and washed in the blood..." 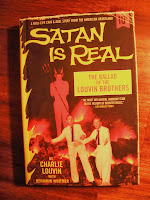 "The beautiful and tragic saga of The Louvin Brothers—one of the most legendary country duos of all time—is one of America’s great untold stories. Charlie Louvin was a good, god-fearing, churchgoing singer, but his brother Ira had the devil in him, and was known for smashing his mandolin to splinters onstage, cussing out Elvis Presley, and trying to strangle his third wife with a telephone cord. Satan is Real is the incredible tale of Charlie Louvin’s sixty-five-year career, the timeless murder ballads of  The Louvin Brothers, and an epic tale of two brothers bound together by love, hate, alcohol, blood, and music." (From amazon.com)

I could talk forever about the music of The Louvin Brothers, and how, like The Beatles' music, it has been a soundtrack to my life. The Louvins wrote and played the kind of country music that modern Nashville pretty well tries to pretend it has outgrown, somewhat like a self-conscious teenager who is ashamed of his uncool parents. Emmylou Harris may have said it best: “There was something scary and washed in the blood about the sound of the Louvin Brothers.”

For those who know their music, beyond the melodies, beyond Ira Louvin's incredible songwriting talent, beyond the Grand Ole Opry and the Country Music Hall of Fame, beyond all of it lie the most incredible vocal harmonies in American music. The two brothers sang gospel, folk ballads, bluegrass, honky tonk, and they sang all of it with conviction. And their impact on other musicians was bigger than they could have realized. From the Everly Brothers to Gram Parsons, Emmylou Harris, Ray Charles, Elvis Costello, Raul Malo, Alison Krauss, and so many more -- Vince Gill said, "You can’t find anybody, I don’t think, that was not inspired by them.” My dad sure was. My dad had a beautiful old Martin guitar, a 00021 I think, from about 1947, and my siblings and I grew up singing old-timey gospel songs at home and at church as he sang and played along. There weren't many songs by the Louvins we didn't know, and their songs were always our favorites whenever we sang at revivals or songfests or just sat around the living room with relatives and friends, telling family stories and singing as the mood took us.

Time never dimmed our love for and appreciation of their music. Although my dad rarely traveled after us kids started coming along, in the early 1990s I convinced my parents to make the long drive to Alabama with me to visit one of my siblings. My persuasion took the form of "maybe we could drive over to Sand Mountain and see the Louvins' old homestead." Having said as much to someone like my dad, 'maybe' became a certainty.  It's no exaggeration to say that meeting Charlie Louvin and his wife, Betty, and finding them to be as genuine as the music Charlie made, was the greatest thrill of my dad's life, outside of his marriage and the birth of his children. My dad didn't want to leave, and if he'd brought his guitar I feel certain he would have done everything in his power to persuade Charlie to play with him. And only three or four years ago, I made my way over to the little opera house in Nelsonville, Ohio, to see an aged-in-body, young-in-spirit Charlie in concert. The voice had been roughened and shrunk by time, but he still had the magic. You should've seen that audience when he launched into "The Great Atomic Power."

I wish, oh, how I wish that my dad could have read this new book, Satan Is Real: The Ballad of the Louvin Brothers, by Charlie Louvin and Benjamin Whitmer. He always wanted to know more about Ira and Charlie, about what went wrong between the brothers that caused the duo to break up, about what it was like to be a country star in the days when 'country music' meant exactly that and not something pop/rock dressed up with a twang to pass as country. With this book, I know he would have found a lot of the answers he sought, because this book is pure Charlie: candid, rough-hewn, unpretentious, thoughtful. Charlie's honesty about the brutality visited upon Ira (and himself, but more Ira) by their father, about Ira's nasty, alcohol-fueled behavior, about the hard times in general, is breathtaking. Charlie doesn't sugarcoat anything, but his simple recollections carry no taint of scandalmongering in order to sell a book either. Here, he says, is just how it was.

Co-writer Benjamin Whitmer (of Pike fame) has done a superlative job of eliciting and organizing the stories of Charlie's life, clarifying and illustrating his words without ever once getting in the way of Charlie's natural voice. Thus, not only the music and the brothers are revealed here, but also there is a glimpse into mid-century rural Appalachian culture, a time when small family farms were worked by hand, a time when communities came together around a single radio. And also a time when a man could with impugnity beat his children senseless; when a sixth-grade education was all most children of Appalachia could aspire to; when racial slurs were accepted conversation; a time and place of grinding poverty that could yet yield the finest of vocal harmonies. Along the way, Charlie talks about the celebrities of his day and industry, not namedropping but recognizing the roles these people played in his life: Roy Acuff, Fred Rose, Hank Williams, Elvis (don't need a last name here, do I?), Colonel Tom Parker ("a fourteen-carat asshole"), and Kris Kristofferson. And the chapter about the loan Johnny Cash made to Charlie is worth the price of the book all by itself. Charlie testifies to Cash's character in a way that the biopic, Walk the Line, never does.

Through all of it, Charlie's own character, not perfect but perfectly human, emerges. My dad would've treasured this book. I will, too.

Available at all the major bookstore chains and independents, in hardcover and ebook:
RECOMMENDED.
at 11:10 AM