REVIEW: CHRISTMAS AT THE MYSTERIOUS BOOKSHOP edited by Otto Penzler 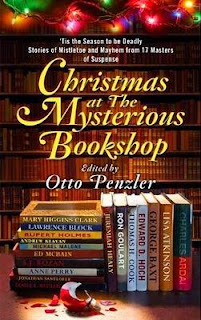 The first story in this delightful collection of Christmas mysteries just might be the best gift I'll receive this holiday season. Give Till It Hurts is one of the comical John Dortmunder stories by the much-missed Donald E. Westlake. Dortmunder, for those not familiar with the character, is a thief. He's a good thief, which is to say that he's good at his job, not that he is a good man. But things seem to happen to Dortmunder; things no thief, however proficient, can plan for.

With the cops hard on his heels, Dortmunder passes himself off as a guest in a Christmas poker game, sitting in for the missing "Don," who can be no other than Westlake himself, of course. This poker game takes place after hours at The Mysterious Bookshop, with participants including the likes of "Larry" (Lawrence Block?), Justin (Scott?), and the proprietor of the bookstore himself, Otto Penzler. I found myself chuckling because Dortmunder was still so very -- Dortmunder; I found my eyes welling up because I hate the idea of a world without the possibility of more of Westlake's wicked sense of humor. This is the very essence of a Christmas gift: something unexpected that brings joy and also touches the heart.

As a result, I find myself deeply grateful to Otto Penzler for sharing these stories with the rest of the world. You see, Penzler personally commissioned each of these 17 stories, one a year since 1993, from writers whose names alone inform the reader of the quality within this book: Westlake and Block, of course, but also Ed McBain, George Baxt, S.J. Rozan, Edward D. Hoch, Charles Ardai, Mary Higgins Clark, Rupert Holmes, Anne Perry, Jonathan Santlofer, Michael Malone, Andrew Klavan, Jeremiah Healy, Ron Goulart, Lisa Atkinson, and Thomas H. Cook.

Penzler's requirements were that each work must be a mystery/ crime/suspense story, that it be set during the Christmas season, and that at least some of the action must take place in The Mysterious Bookshop. These stories were then produced as pamphlets, 1,000 copies, and given to customers of the bookstore as a Christmas present. I am mighty sorry that I have not been a customer right along, but Penzler clearly has a forgiving nature since he now makes these stories available to anyone with the price of admission.

Westlake's story is followed by Schemes and Variations by George Baxt, wherein his snarky detective, one Pharaoh Love (I kid you not), is on the trail of a killer who has already done in three book dealers in the search for a rare Dashiell Hammett manuscript. Indeed, missing, stolen, or rare manuscripts play a role in several of these stories, as does Otto Penzler himself, but the reader is pulled along by the sheer charm and ingenuity of the writers. The name-dropping alone is staggering, and evoked a very real, very unChristian envy in me for those who have the privilege of dropping in at Penzler's store whenever they choose.

Generally designed to be lighthearted mysteries, there is yet a darker gem of a story by Ed McBain (who comes in for some good-natured joshing by some of the other writers for his vast collection of pen names). His I Saw Mommy Killing Santa Claus reveals the sinister side of the jolly holiday season. Lawrence Block chips in with As Dark As Christmas Gets, a clever homage to Nero Wolfe, while Jeremiah Healy introduces The Holiday Fairy, wherein one might note a slight resemblance to a famous Agatha Christie story but to which Healy has added a certain poignancy and imbued with far greater affection than any of the Dame's characters were wont to possess. And Mary Higgins Clark closes out the collection with What's in a Name?, an Algeresque tale for perennially rejected writers.

As a holiday gift for mystery lovers, I highly recommend this collection. But you know, people will say, 'Oh, I got her a book last year. She has lots of books, she must get so tired of receiving them,' and then they'll go out and buy you some overpriced bath salts or too-small house slippers or an Air Supply cd, and you won't get this (or any other) book. You'd better just buy it for yourself.
at 4:59 PM