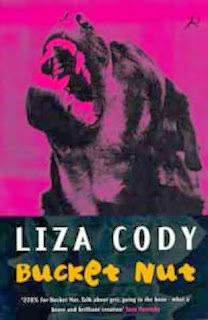 I don't know your name, Miss ?, and I barely remember what you looked like, but you walked into Sleuth of Baker Street on Friday, July 9, 2010. I was standing near the counter, chatting with the store's co-owner, J.D. Singh, and wondering whether I could afford to add just one or two more books to the stack of ten I had already selected. And you told J.D. that the last time you were in the shop, he had recommended Bucket Nut, by Liza Cody; that you loved the book and wouldn't he please recommend something else.

I don't remember his reply but I picked up a copy of Bucket Nut and added it to my stack, just that quick. And now I want to thank both you and J.D. for guiding me to this book. Yeah, I loved it. Yes, I will read more by Liza Cody.

See, I had never heard of Liza Cody, and yet she has nearly a dozen novels and a slew of short stories to her credit. She also has some CWA awards and MWA nominations under her belt. So why hadn't I heard of her?

I don't know. But don't the rest of you be like me, stumbling around in the dark until you find this gem of a book by a gifted writer. What's it about? Oh, you always ask that.

It's about Eva Wylie. Eva is a big woman. Big. Bigger than most men. She's not very attractive. Okay, okay, she's ugly. And she has bad teeth, her mouth is forever in pain. There are some who would accuse her of ranking fairly low on the IQ pole, too. She lives in a POS RV in a wrecker's yard, with no electricity and no hot water, and for her that's a real step up from sleeping on the streets. But Eva has goals. She's working (night security in the wrecker's yard and days she's an errand-girl for a mobster named Mr. Cheng) and saving her money so she can get her teeth fixed. She stays fit through daily workouts and gets the occasional pro-wrestling bout, but she dreams of becoming the heavyweight champion of England. She's a "villain" though, and they don't usually get to be champions. So she revels in the boos and jeers and keeps on dreaming.. More than anything, Eva longs to find her sister, Simone, from whom she was separated at around age 12 after an incident Eva can't properly recall. Otherwise, Eva wants only to be paid for her work and left in peace. But when a mob war develops, and the bullets and bombs start flying, Eva finds herself at the center of the violence.

Told in first person, Eva is an unreliable narrator of great good humor and volatile temper, and the reader will interpret actions and speech in ways she will not. Author Cody's prose is direct and vivid, the story funny and poignant. Remember the Elmore Leonard quote about taking out of your writing all the bits that people skip over? Cody has done that. The story is lean, not overly complicated, and the book reads like a short story, with every word serving a purpose, in the right place and at the right time.

Strictly speaking, Bucket Nut may be a crime novel, but it is not a mystery. In some ways, for the twenty-something Eva, it's almost a coming-of-age story. Eva is a street smart character, she's had to be, but when it comes to people and relationships, she's naive. Even when she realizes someone is making fun of her, most times it doesn't bother her. She has an enormous capacity for forgiveness, most obviously displayed in regard to her mother whom Eva pities because "she had a hard life." The reader will not feel the same sympathy for her mom. There's no question that the events of Eva's childhood left her emotionally stunted and unable to relate to people in ways the rest of us take for granted. But don't you pity her. God, don't you pity her for one minute, because Eva is strong and she is capable and she is determined. Her dreams may cost her dearly, but she's ready to pay the price. HIGHLY RECOMMENDED.
at 1:49 PM